4 Killed in Crash Near Tecumseh 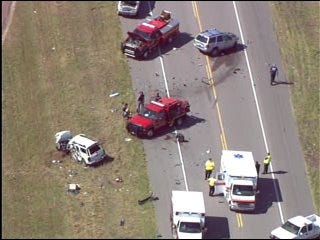 OKLAHOMA CITY -- Four people, including an 8-month-old, were killed in a collision along U.S. Highway 177 near Tecumseh in Pottawatomie County.

Bobby Wakolee was driving south on Highway 177 at about 4 p.m. when Cantrell's northbound SUV traveled left of the center line, hitting the other SUV head-on, according to an Oklahoma Highway Patrol report.

Firefighters had to work for two hours to free Bobby Wakolee and Cantrell from their vehicles.

The highway was closed for four hours while crews cleared the scene.

4 Killed in Crash Near Tecumseh