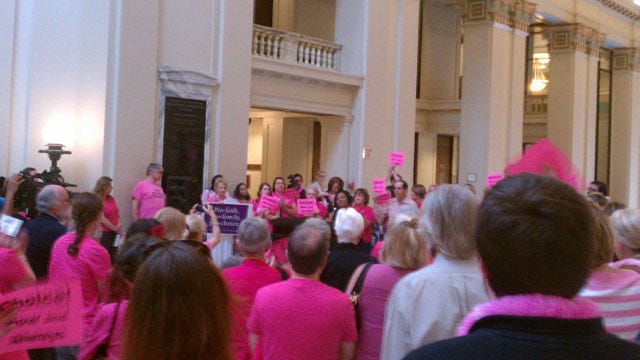 OKLAHOMA CITY -- Planned Parenthood and members of several other women's rights groups rallied at the state Capitol Thursday afternoon to stop legislation the group says will hurt women in Oklahoma.

An amendment in State Senate bill 709 would cut funds and divert state money away from Planned Parenthood to other health programs. Protestors argue the amendment is the legislature's latest attack in a "war on women."

State Rep. Jason Murphey, R-Guthrie is urging state lawmakers to stop funding for Planned Parenthood. He says the state currently gives somewhere around $500,000 to the organization; an organization he says "encourages abortions."

Rep. Murphey says his amendment reflects the views of his constituents and Oklahomans across the state.

Planned Parenthood says, however, the money it receives from the state does not go to funding abortions. It says the money funds the organization's nutritional program, which helps feed women and teaches them the importance of eating healthy.

Other bills abortion rights activists are trying to stop include 17 pieces of legislation they say target reproductive rights, including one that would make it impossible for insurers to offer coverage for abortion in cases of rape and incest.

The women's organizations say the legislature is refusing to hear three positive bills designed to lower the rate of unintended pregnancies in Oklahoma. One bill would require age-appropriate and medically accurate sex education be taught in schools. Another bill would ensure pharmacies dispense contraceptive drugs and devices despite a pharmacist's personal beliefs.