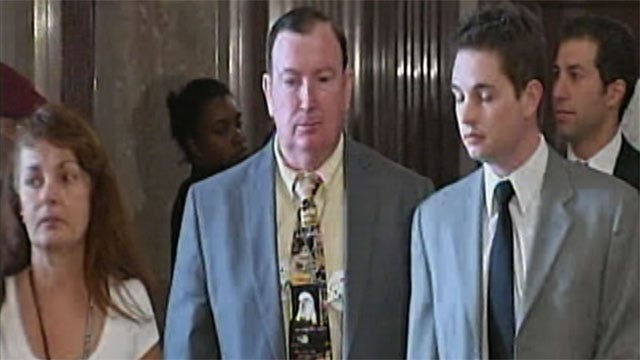 OKLAHOMA CITY -- The Oklahoma County courthouse is closing at 3:30 p.m. due to weather. All jurors in Ersland trial are being sent home early for the day. Jurors are expected to be back tomorrow at 9 a.m.

After an hour delay, testimony has resumed in the first-degree murder trial of a local pharmacist.  For almost an hour, both the defendent Jerome Ersland and the jury had to wait while the attorneys and the judge met behind closed doors. Neither defense or prosecutors are saying why the delay happened with a gag order in place.

Testimony resumed shortly after 10 a.m. Detective Ryan Porter from the Oklahoma City Police Department was back on the stand for cross-examination. Porter testified Monday that no evidence supports Ersland's claim that both robbers who entered the store opened fire. Porter said 16-year-old Antwun Parker was unarmed.

Later, Doctor Chi Choi, lead pathologist with the medical examiner's office, took the stand. She has testified that she did not perform the autopsy on Antwun Parker. The autopsy was performed by Chief Medical Examiner Dr. Collie Trant, who is no longer with the medical examiner's office. According to Choi, Dr. Trant ruled that the first gunshot wound to Parker's head was a non-fatal wound.

According to Dr. Choi's testimony, she and Interim Chief Medical Examiner Dr. Andrew Sibly reviewed Dr. Trant's findings and instead they both thought the first gunshot wound to Parker's head was potentially, but not immediately, fatal. Choi also said being unconscious doesn't mean immobile. She added that one of the movements by Parker could have been seen as a potential threat.

Choi said Parker died of internal bleeding and his ultimate cause of death was multiple gunshot wounds. The jury was shown Parker's X-rays. Those X-rays show he had one bullet to the head, one bullet in each lung and three bullets in his abdominal area.

Ersland has pleaded not guilty and says he acted in self-defense. Prosecutors say Ersland was justified in firing a first shot that knocked Parker unconscious, but that he went too far when he shot the teen five more times.