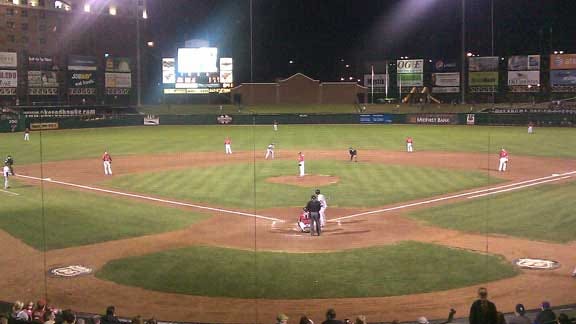 OKLAHOMA CITY – The Oklahoma City RedHawks suffered their worst loss of the season Friday in an 18-5 blowout at the hands of the New Orleans Zephyrs.

The RedHawks (29-40) led 2-1 after the first inning, but it was all downhill from there. The Zephyrs (34-35) put together a huge rally in the second inning and never looked back.

Sean West bunted home the first run of the frame to tie the game, but the rest of New Orleans' scoring came with two outs. Oswaldo Martinez began a string of five consecutive batters to reach base, which resulted in the Zephyrs batting around and driving home a total of seven runs in the inning to go from down one to up six.

That inning opened the floodgates, and New Orleans continued to pour on runs for the rest of the night. They added two more in the fourth before another huge inning in the sixth, when they batted around again and scored six runs for a 16-2 lead.

The Zephyrs added another run in each of the next two innings and mercifully scored no more than that. Oklahoma City finally managed to generate some offense in the bottom of the eighth, when Tommy Manzella hit a three-run home run to finish the night's scoring.

Lost in the offensive explosion was the strong pitching performance from Sean West (2-3), who held the RedHawks to just two runs on six hits in seven innings on the mound.

Ryan Rowland-Smith (2-7) suffered an awful night for OKC, but stayed on the mound into the sixth inning. He gave up a total of 14 runs – five of them unearned – on 13 hits, while walking four and striking out two.

Daniel Meszaros took over the sixth and did not fare much better. He gave up three runs on five hits and a walk while only managing to retire three batters.

Friday's contest marked the most runs the RedHawks have allowed all year as well as their largest margin of defeat. Their two worst losses this season have come in the span of 12 games, the other a 14-2 defeat on June 6.

The blowout began a four-game series between the RedHawks and Zephyrs on a sour note, but OKC will try to recover in Game 2 at 7:05 p.m. Saturday.