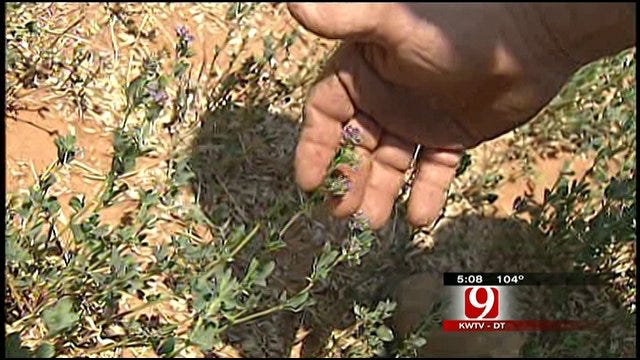 ARCADIA, Oklahoma -- While the high temperatures continue to be a problem for all Oklahomans, none may be feeling the effects more than the state's farmers.

The extreme drought has destroyed much of their crops and if weather doesn't start to cooperate, it could happen again.

Alfalfa which would normally be knee high at this time of year is barely ankle deep. For Curtis Roberts who farms near Arcadia, it means another lost crop.

It's the painful reality for Roberts who has had to sit back and watch his thirsty alfalfa crop ruin any chance he has of turning a profit.

"It's something you don't worry about," he said. "You sort of look to the future and hope we get some rain."

But with no real rain in the forecast, Roberts realizes the outlook is grim.

"On a scale of one to ten, we're getting pretty close to a nine," he said.

That's a number echoed by farmers at the OSU-OKC farmers market.

Terry Britt, a horticulture teacher and farmer at the OSU-OKC farmer's market seconded Roberts' assessment of the drought conditions.

"On a scale of one to ten, it's about a nine as far as seriousness," he said. "With the heat and droughts, it's been majorally difficult to grow anything."

That difficulty is a problem that farmers see first-hand and that consumers eventually see at the grocery store, Britt said.

"We are naturally having to charge higher prices this year because we don't have the quantity of the product they usually have."