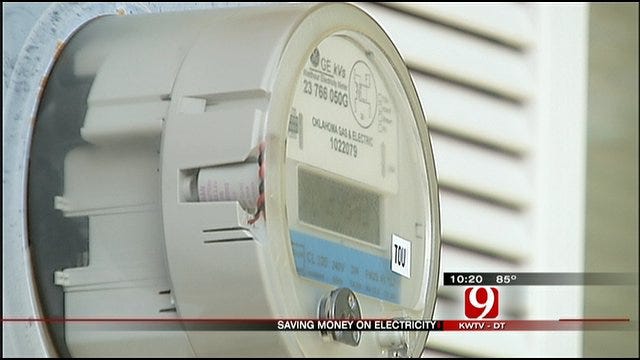 OKLAHOMA CITY -- The hot temperatures are putting the heat on our pocketbooks. If you've gotten your electric bill lately, you know what we mean.

But OG&E said it has a way to save us hundreds.

Some of you may have gotten a flier in the mail advertising OG&E's "Time-of-Use" program.

The company is sending them out to everyone who has a smart meter but anyone can participate and, according to OG&E, save hundreds of dollars.

For five hours every weekday, Susan Necombe's air conditioner doesn't blow, her pool pump doesn't run, her ovens don't cook, and her washer and dryer sit idle. And for her efforts?

"About $500 a summer is what I've saved in the past and what I'm planning to continue to save," said Necombe.

Susan is able to save because while the average customer pays nine cents per kilowatt hour, she only pays half that except between 2 p.m. and 7 p.m. weekdays when she pays 23 cents a kilowatt hour.

OG&E is encouraging customers to sign on to the program to encourage them not to use as much electricity when it is in the highest demand: during the heat of the day when all those business air conditioners are running.

"We can decrease the amount of electricity we have to generate which in turn means we don't have to build another power plant," said OG&E spokesperson Kathleen O'Shea.

Necombe, who is home during the day, admits it can get a little toasty but she has a plan.

"Before two o'clock I keep my house at 68 degrees, so it's nice and frigid in here," said Necombe.

She uses a fan to keep the air circulating. And if it gets too hot she goes shopping with the money she's saving.

If you don't have a smart meter, OG &E will come out and install a special meter. They will do that at no cost to the customer.

OG&E said you can try the program at no risk for one year, and if you end up paying more than you would if you weren't on the program, they will credit you the difference.