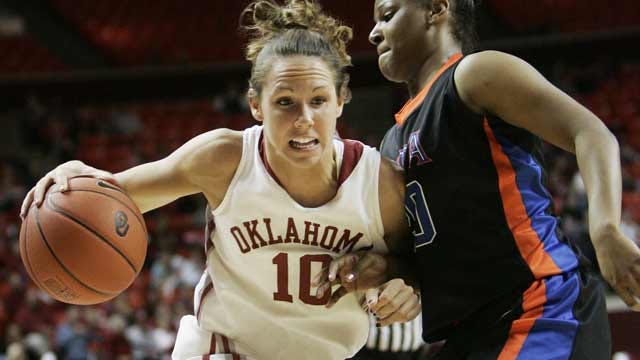 NORMAN, Oklahoma – Oklahoma women's basketball player Carlee Roethlisberger is taking her talents from the hardwood to the volleyball court.

"We're excited to have Carlee join our team," Restrepo said. "She's was an integral part of the success of our women's basketball program, and we're thrilled she's closing out her athletics career as a member of the volleyball team. We look forward to having her contribute to our team this season."

For the past four years Roethlisberger has been a part of the successful women's basketball team under head coach Sherri Coale. This past year, her senior season, she started all 35 games and shot 38.2 percent from the field, 31.7 percent from the three point line and 71.9 percent from the free throw stripe while also being named to the Academic All-Big 12 team.

In those four seasons with the Sooner basketball squad, she was a part of the senior class that won a record 55 games in 63 contests on the home court at the Lloyd Noble Center.

Roethlisberger, the younger sister of Pittsburgh Steeler quarterback Ben Roethlisberger, was a top volleyball prospect in high school who was recruited by Nebraska and Minnesota.

"I consider myself blessed to have been part of this University of Oklahoma family for the last four years as a member of the women's basketball team and even more honored that I will have the opportunity to continue my career as a Sooner with the OU volleyball team," Roethlisberger said. "Ever since I set foot on campus I have enjoyed watching them play and represent this University with class and success. I only hope that I will be able to play some part for this team to help them continue their winning tradition."

Roethlisberger and the OU volleyball team will kick off the season August 28 at 7 p.m. against SMU at the Nike Invitational in Norman.