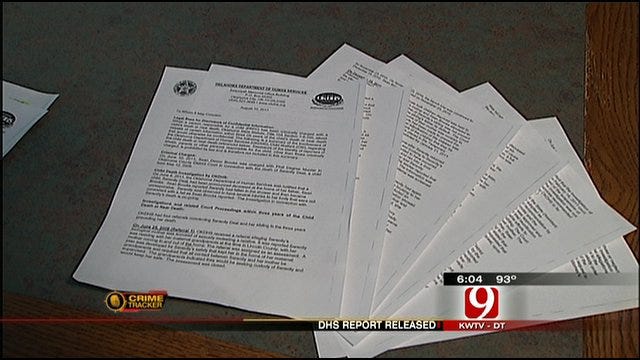 OKLAHOMA CITY -- It has taken DHS more than two months to release a six-page report giving us a glimpse into the shattered world of Serenity Deal.

Serenity Deal had just turned five the month before police found her lifeless body inside her biological father's apartment.

He now stands accused of her murder and the agency ordered to protect and serve her is under fire.

"We had to be able to construct exactly what happened in this case and we had to have court records to do it," said Sheree Powell, spokesperson for the Oklahoma Department of Human Services.

"Unfortunately, there were records missing out of the court file and to be able to reconstruct what happened in court, we had to get court transcripts," she said.

In their report, DHS reveals they had four referrals concerning Serenity Deal in the three years before her death.

The first came in 2009 when DHS received a referral alleging Serenity's biological mother, Samantha Deal, was accused of sexually molesting a relative.

Later DHS received another referral that serenity was having unsupervised contact with her mother and her live-in boyfriend, who happens to be a registered sex offender.

So serenity was made a ward of the state, and trial reunification with her father began.

But then, this January, DHS received two referrals about Serenity returning from an unsupervised visit with her father with scratches and bruises on her face and body.

A doctor was called and she was even taken to the ER where a triage assessment determined no abuse or neglect existed.

Powell admits mistakes were made by the DHS and are being corrected.

"We've conducted a thorough review of the case and we will hold staff accountable for not following policies and procedures," she said.

And Powell says they immediately suspended case workers and supervisors associated with this case.