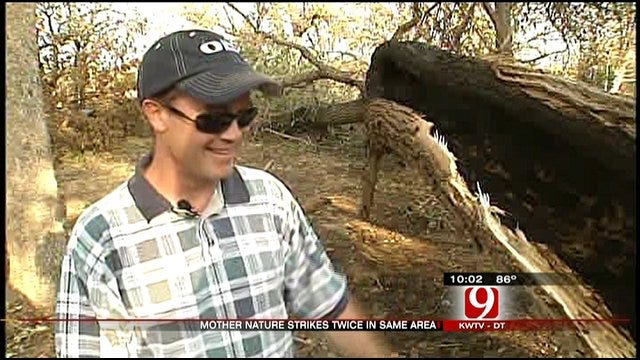 EDMOND, Oklahoma – Thousands of OG&E customers were still without power Wednesday evening from Tuesday's storms. The power was out in one area of Edmond that was hit hard twice by mother nature in the past four days.

It was a double whammy for residents just north of Coffee Creek Road and west of I-35. On Saturday, the neighborhood was hit by a wildfire. On Wednesday, residents were just getting power restored after the storms.

A tree in Mike Shore's backyard pretty much sums it up in a nutshell. It was damaged twice. Once, burnt black from the fire. The second, leveled to the ground from the winds of the storm.

"Everything got weak … the cottonwood is gone," said Shore.

Shore and his family spent the day cleaning up the mess caused by the storm. It is safe to say the people of the area have been through a lot.

Fletcher was going on 24 hours without electricity, which means not only no air conditioning, but no water, too. The water was off in the area because it is provided via wells.

Those in the area say the recent cool down came at just the right time. For now, the Shores continue picking up limbs, hoping Mother Nature will have more mercy in the future.

OG&E has been making a lot of progress in restoring power throughout the day Wednesday. News 9 is told they plan to have Edmond fully restored by Wednesday evening.