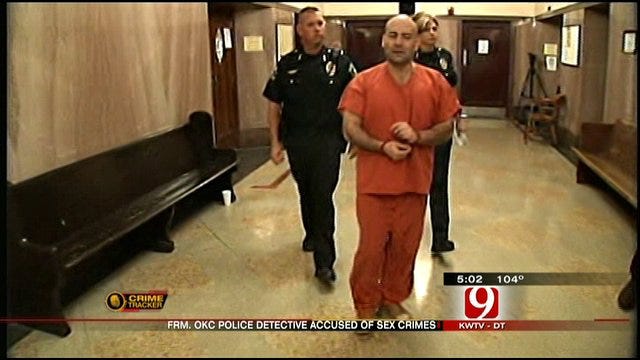 OKLAHOMA CITY -- Judge has ruled to drop more than 20 of the counts against former police officer Maurice Martinez, after the defense hammered away at much of the testimonies and evidence that were seized at the Martinez's home.

On Tuesday, Martinez appeared to be much more confident and in better spirits as he walked into the court room. His family was also in court to show supports.

Prosecutors have called a sex crime detective and two computer forensic experts to the Oklahoma City Police Department to talk about the graphics found on an I-phone and computer that were seized at the Martinez's home.

But the defense team was calling into question whether the search warrant issued for that phone was even legal, since certain details were left off of the warrant.

The defense also had plans to call its own set of witnesses, but it was denied by the judge. Those witnesses were going to be several of the adopted sons who were going to testify that Martinez did not molest them and nothing ever happened the way it was reported.

"This should be a search for the truth," said David Slane, Martinez's attorney. "It shouldn't be not calling victims, never heard the police not call the victim in my 20 years I've never heard it."

Despite the fact that judge has dropped more than 22 of the counts against Martinez, the judge has bond Martinez over for trial, So he will face at least one sexual crime against children count, one child pornography possession count, as well as one abuse of a care taker count.

In light of the numerous charges being dropped, the defense says it plans to file a motion to have Martinez's bond reconsidered.