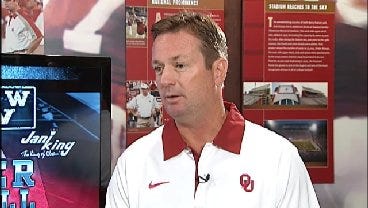 NORMAN, Oklahoma – With less than a week until the first game of the season, college football fans, coaches and players are itching for some football.

News9's Dean Blevins sat down with Oklahoma head coach Bob Stoops this week to talk about the Sooners progress thus far and about the upcoming season.

Now that two-a-days and scrimmages are finished, Coach Stoops says he is pleased with how the workouts have gone so far and is looking forward to the season.

One of the biggest differences the team is already adjusting for is their play without senior linebacker Travis Lewis.

Related Story: Travis Lewis Out With Broken Bone In Foot

"I wish we had Travis Lewis, that's a big blow, but knock on wood the rest of the guys come through it well," said Stoops.

Coach Stoops also talks this week about the committee of guys the team has at running back.

"They've all been pleasingly solid and good. They've all taken care of the football, they all have a little different change of pace, but they're quality guys," said Stoops. "If the line and the guys up front will give them some space, we have some guys that will make some things happen."

Stoops also talked about the success the team is having on the offensive line saying he believes they have more people who are ready to play and are mature than they have had in the past.

Listen to the rest of what Coach Stoops had to say about the season opener against Tulsa as well as the top five matchup against Florida State, and much more in his interviews above.