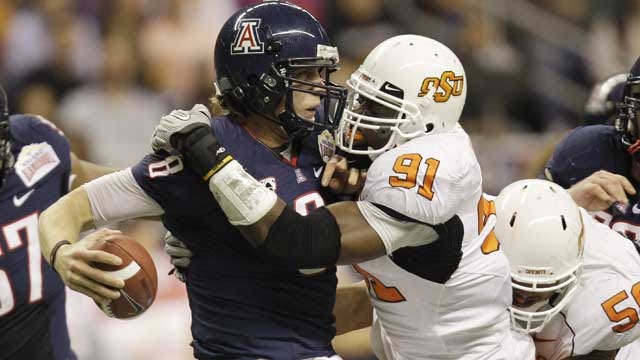 STILLWATER, Oklahoma – Oklahoma State is fresh off a 61-34 win over Louisiana in its season opener, but will not get much time to savor that victory. The Cowboys have a short week before they have to face Arizona Thursday.

OSU and Arizona faced each other in the Alamo Bowl to end last season, and the Cowboys convincingly won that game 36-10. But since then, the Wildcats have seen significant changes to their coaching staff and defensive line.

Despite the changes since the two teams last met, Arizona still has a dangerous offensive duo in quarterback Nick Foles and receiver Juron Criner. And OSU's secondary is well aware of the challenge it is about to face.

"As far as Criner, he's a great athlete," cornerback Devin Hedgepeth said. "He can jump; he can get in the air. He has great hands, so we definitely gotta come in prepared for him and just come hard to play."

The Cowboys successfully held both Foles and Criner in check in the Alamo Bowl. Foles only averaged 5.6 yards per passing attempt and OSU intercepted him three times.

"Anytime you compete a quarterbacks that's got a number of games of experience, you're always concerned about that," OSU head coach Mike Gundy said. "But he throws the ball well; he's been accurate and throws the deep ball well. He's got nice touch, and lays it up and lets them go get it."

To repeat their success against Arizona's passing attack, the Cowboys plan to get pressure on the quarterback; especially with their defensive line, which recorded four sacks in the season opener Saturday.

"Our mental errors were very minimal, which in the first game you're always concerned about as a coach," defensive coordinator Bill Young said. "Effort and mental errors; they really worry you. We did well in both of those."