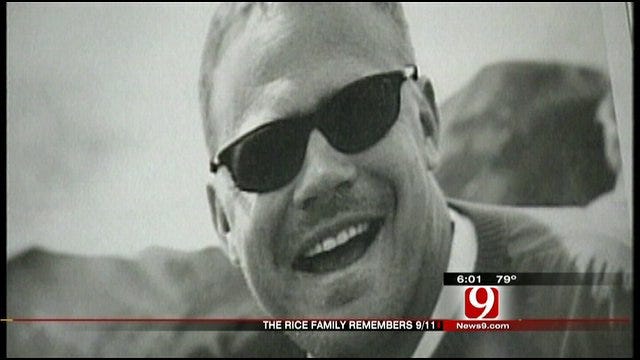 OKLAHOMA CITY -- This coming Sunday will mark the 10 year anniversary of the September 11 attacks. People across the country lost loved ones that day, including right here in Oklahoma.

The Rice family lost their son David when the twin towers crumbled.

"It is still surreal in a lot of ways when I stop and think it's been 10 years since I've seen my son," said Cindy Rice, David's mother. "I will always have a memory of him looking like he did right before he died."

Outside Christ the King Catholic Church in Nichols Hills, is a tree planted in David Rice's honor.

The mighty Oak has grown and blossomed with each passing year. Not a day goes by that Cindy Rice does not see that tree and think about her son.

We were with Cindy and her husband Hugh when they made that trek to ground zero on that first anniversary. But this year they will make that trek with family in private.

"We will have 10 years behind us," said Cindy. "We have grown to enjoy our life more each year by what we are grateful for today."

"Like a lot of human beings he struggled," said Hugh Rice, David's father. "Particularly in his youth."

Hugh says David battled addiction, but managed to overcome it. He also started helping others who also struggled with it.

Then came September 11, Hugh now wears a special pin in remembrance of that day.

"When we went up on the first anniversary there were 25 thousand of us who walked down to ground zero so that's an average of eight people per family," Hugh said.

Hugh says he remembers walking down with one man who had lost not just one son, but two. He says now he and his family is part of the global community that lost loved ones in the attacks.

"When there's loss sometimes there is opportunity and in this case here all of our children were living on the east coast," recalled Hugh. "But because of this Andrew came back to give us some help."

Andrew Rice stayed, got married, and became a state Senator. He is now raising his family here in Oklahoma City.

His oldest son Noah David share's his brother's name sake. They too will join Hugh and Cindy as they make the trip back to New York.

And Cindy says she is anxious to see the memorial and the museum that was built to honor all of those who perished that day.

"It will be very sad in one way," laments Cindy. "But also the heartfelt labor that went into the actual building of the memorial is phenomenal."