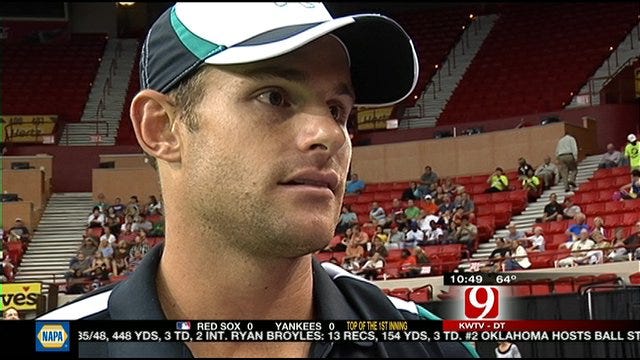 OKLAHOMA CITY -- Andy Roddick and Mardy Fish, the top 2 tennis players in the United States, were in Oklahoma City Sunday to play in the Oklahoma Energy Classic.

Roddick teamed up with his older brother John who is the head men's tennis coach at the University of Oklahoma for a doubles match against Fish and David Martin.

In that game the Roddick brothers got out to a quick 2-0 lead, but dropped the next three points before knotting it up, 3-3.

Fish and Martin finished the comeback by a final of 8-5 after only allowing the Roddick duo two more points in the match.

Later Roddick and Fish took the court for a two-set singles match.

Early on, Roddick came back from being down 40-15 to get to deuce twice. He went up 5-4, and then closed it out by holding serve winning 6-4.

In the second set, Fish got an early break when his shot on break point clipped the net and popped over Roddick's head before falling in to give him a 3-1 lead. He finished it out 6-3.

In the tiebreaker, Roddick, the world's 14th-ranked player, fell behind 3-1 before winning the next four points -- three on errors by Fish, to win 10-7.

Sunday's friendly matches were a welcomed time to bring tennis to the state and for the players to have some fun and show their sense of humor.

Roddick interacted with the crowd throughout the night and even took requests from the audience on other tennis players to imitate. He rolled up his sleeves like Rafael Nadal and mimicked other greats like Pete Sampras and Andre Aggassi. Perhaps the funniest was his impression of Serena Williams as Roddick rolled up towels in the back of his shorts and acted like he was yelling and berating a line judge.

While at the event, Roddick gave Dean Blevins and John Holcomb a chance to return one of his serves, which have been clocked at up to 300 miles per hour. He also took time out to speak to the two sports directors after the event.

"It's always nice to do these events, they're always a little more light-hearted and we can have fun with the crowd. It's not as serious for us but we can show some good tennis to this area," said Roddick.

The matches were the first pro tennis event in Oklahoma City since the 2002 Davis Cup.