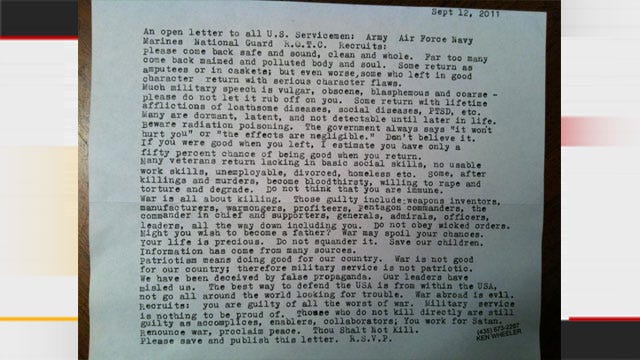 OKLAHOMA CITY -- An Oklahoma City military wife received an alarming letter from a stranger. The letter said her husband serving in Afghanistan would either die overseas or turn to a life a crime.

The letter came from Utah from Ken Wheeler. The veteran mass-produces typed letters urging service men in particular to avoid fighting overseas. He says the price for their service is mental illness, divorce or death.

Brittany Cole's husband is a part of Oklahoma's 45th Infantry Brigade. While her husband mourns the death of a close friend, at home, Brittany is trying to hold it together.

She said she reached a breaking point Wednesday which came through her mailbox.

"He's attacking us saying what they are doing is wrong and we are just doing the best we can to get through this year," she said.

Wheeler writes: "You work for Satan. Renounce war. Proclaim peace. Thou shall not kill."

On the phone Wheeler said, "She got the letter then that was a mistake, an error. It's regrettable and I apologize." He said the letter was meant for Cole's husband.

"This family is being supported by the army. We have a loved one that we want to come home," Cole said.

According to Wheeler, odds are against servicemen.