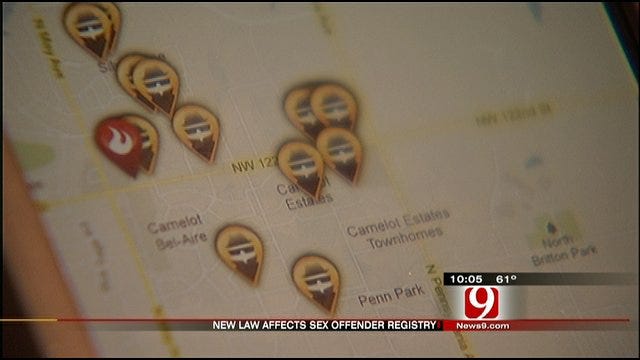 OKLAHOMA CITY -- Hundreds of sex offenders could be coming off the statewide registry because of changes to sex offender laws.

Before November 1, people caught urinating in public had to register as sex offenders, but a new law is softening the penalty.

The big question is how much of an impact this law will actually have and there is disagreement, depending on who you ask.

"It's going to have very little, if any, impact on the number of sex offenders registered for indecent exposure," said retired parole officer Mark Pursley.

Pursley spent ten years overseeing sex offenders and said he was unaware of any sex offenders convicted of indecent exposure who were charged only because they urinated in public.

Others disagree and said this actually cleans up the sex offender law so that only dangerous criminals end up on the registry.

Attorney David Slane said that's not the intention of the sex offender law, but moving forward this clarification could be beneficial since he is aware of cases like this in the past.

"Sometimes you'll see people leaving nightclubs and things late at night and they can't get to a restroom late at night, get stopped and they're urinating in public. They have to register,' said Slane. "Hopefully, in the future, it may prevent several hundred people from having to register."

Pursley agreed that urinating in public is not a sex offense but explained, "Those charges are usually public indecency and that is not a registerable offense."

Bottom line, this law adds more specific language to the sex offender laws. Whether it actually will make a difference is up for debate.