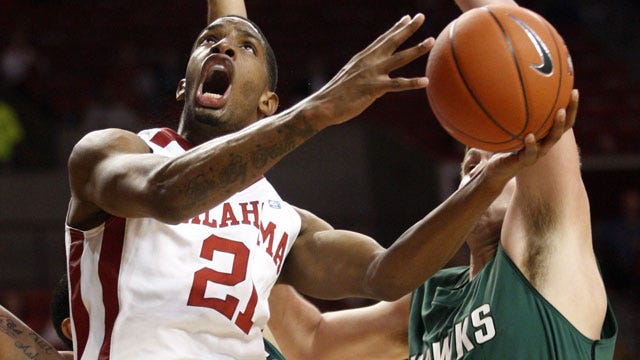 NORMAN, Oklahoma – It was only an exhibition game, but the Sooners already accomplished something they weren't able to do last season.

With an 85-51 win over Northeastern State, the Sooners topped the 85-point mark for the first time since late in the 2009-10 season.

The style of play evident in the win was a sign of change for Oklahoma, with plenty of full-court pressure, fast breaks and scoring.

Kruger said he was pleased with his team's performance in its first time out on the floor.

"I really like the movement of the ball early," he said. "We didn't turn the ball over very much. We didn't really have to search for shots. We were just ready to move the ball and make good plays for each other."

OU's reliance on its youth was clear, for the top three Sooner scorers were sophomores. Guard Cameron Clark led all scorers with 18 points. Fellow sophomores Tyler Neal and Calvin Newell had 12 each.

Former Mississippi State forward Romero Osby led Oklahoma with eight rebounds. His presence inside will be a big boost this season to an OU team that was 327th out of 346 Division I teams in rebounding last year.

The Sooners jumped out to a 17-2 lead and never trailed in the game. They shot 51 percent from the field and 44 percent from 3-point range.

All 12 players who played for the Sooners saw action in the first half, including multiple walk-ons.

The only significant piece missing was junior guard Steven Pledger, who was suspended for the game for failure to meet team requirements.

The Sooners will be back in action at 2 p.m. on Sunday to host another exhibition game against Washburn.