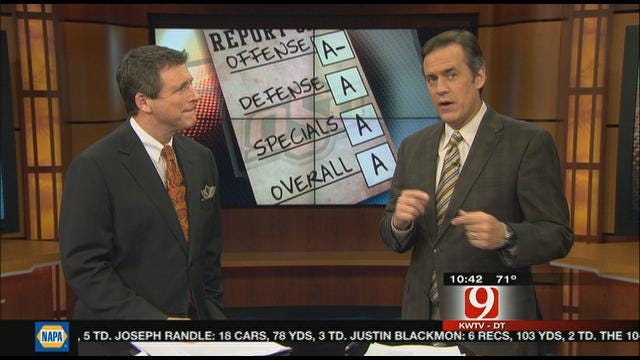 OKLAHOMA CITY – The Oklahoma State Cowboys dominated Texas Tech in every facet of the game Saturday and earned high marks from John Holcomb in this week's report card.

The Cowboys put the game out of reach early with a dominant first half and never looked back. The offense generated more than 600 total yards, while the defense held Texas Tech to only 270 yards.

Brandon Weeden continued to make his case as a Heisman Trophy candidate, passing for 423 yards and nearly having as many touchdowns (five) as incompletions (six). Herschel Sims rushed for more than 100 yards, Joseph Randle had three touchdowns, and Josh Cooper and Justin Blackmon each had more than 100 receiving yards.

OSU's offensive rating suffered slightly because of Randle's two fumbles, one of which Texas Tech returned for a touchdown for its only points of the game.

Those were the Red Raiders' only points because the OSU defense turned in its most complete performance of the year. The Cowboys forced three more turnovers to extend their national lead in that category, and held Seth Doege to just 169 passing yards.

Texas Tech also was just 6-of-17 on third down conversions and only had 16 first downs all day, compared to 31 for the Cowboys. The Red Raiders averaged less than four yards per play, while OSU averaged more than 11 yards per pass.

The special teams units also had an outstanding game, recording a touchdown on a muffed kickoff return and with another excellent kicking and punting game from Quinn Sharp.