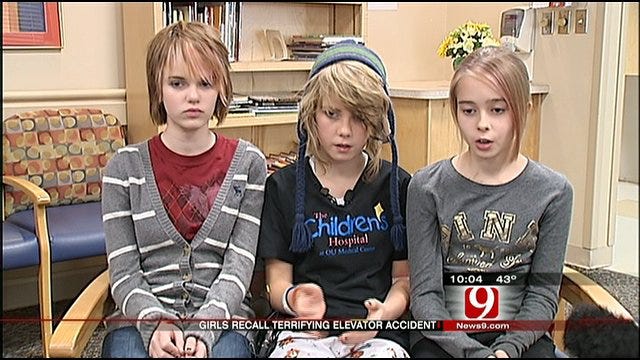 All three girls that were trapped in that elevator earlier this week were back together Thursday afternoon.

The three best friends, who just days ago, were trapped underneath an elevator are now able to talk calmly about it all, beginning with how they got in there in the first place.

"Our friend told us that there was something really cool to see," said Liz Smith.

"Usually it's locked if it's on a different floor so we assumed it was on that floor when it was unlocked," said Ambri Tygard.

But as the girls stepped into the shaft, the door locked shut behind them sending the elevator above down on top of them.

It stopped inches from the dirt floor. Savanna was laying on her stomach.

"The pole was on the back of my neck," she said.

Liz had her head on Savanna's thighs.

"We were in a triangle form," said Smith.

Ambri had her legs across Liz.

"My legs were on top of there and the bar had smooshed this part of my leg so it cut off the circulation down here," said Tygard.

And that was how they would stay: the elevator car on top of their little bodies for 45 minutes until finally rescuers were able to free them.

"Savanna kept saying we were going to live, we're going to be okay," said Smith.

Tygard was released from the hospital Thursday night.