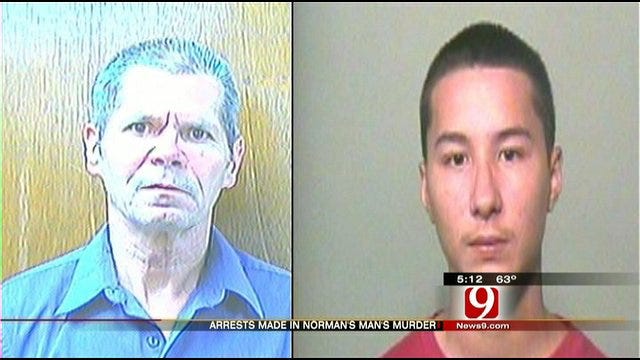 NORMAN, Oklahoma -- The arrests of two men accused of killing a Norman man come just two days after the victim was found in his home. Norman Police made the arrest late last night.

Police are not saying if Reed knew the victim, 80-year-old Clair Owen Pollard.

Pollard's friends and neighbors are mourning his passing and are upset the crime happened.

"(He was a) generous, loving, compassionate all around good man," said Stephen Massy one of Pollards friends.

"I lost a close friend, the world lost a good person and this could have easily been prevented if proper authorities would have kept him in jail where he should have been," said Massy.

Battenfield's criminal history spans several states and includes convictions for murder in Collin County, Texas. According to news reports and public records, Battenfield was convicted of killing a man and a woman, whose skeletons were found at the bottom of a well.

He also faced 50 years for second-degree murder in New Mexico.

That's in addition to charges of rape in Colorado, assault in California and robbery in Nevada. All were committed after he escaped from the New Mexico prison.

Still, a Texas law allowed Battenfield to be released from prison this summer.

The Texas Board of Pardons and Parole confirmed Battenfield was released on mandatory supervision for two counts of murder committed in 1978.

The Department of Corrections in New Mexico confirmed Battenfield spent 11 years in prison for second-degree murder there. The New Mexico DOC released Battenfield in June 2011 after he completed his sentence there.

Records in Colorado show Battenfield is set to serve a 35-year sentence for auto theft and being a habitual criminal in Grand Junction.

Battenfield is also expected to serve 45 years In Carson City, Nevada, for robbery with a firearm.

Records show Battenfield requested his parole out of Texas be transferred to Oklahoma.

It is unclear how the move was approved with Battenfield expected to serve prison time in other states.

Charges for the homicide in Norman are expected to be filed next week.