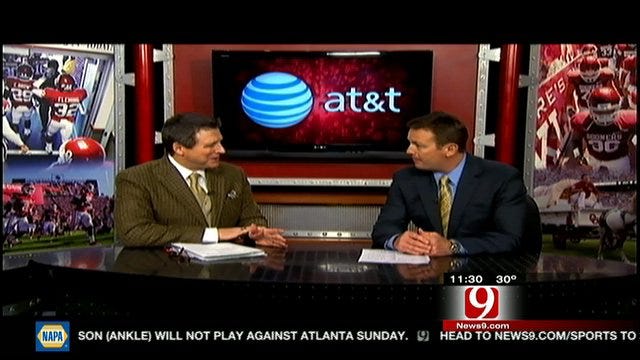 With the Big 12 Championship Game eliminated this season, the Bedlam rivalry game has taken on added significance. Whichever team wins Bedlam will earn the conference's automatic BCS bid, which would be a first for Oklahoma State.

"Here we are in the last game of the year, again with the opportunity to still pursue the Big 12 championship," Stoops said. "That's what you want; it's a big challenge once again going to Stillwater back-to-back years, but I know our players are excited about it and really looking forward to that challenge."

If OSU wins, it would have the best record in the Big 12 and be the outright conference champion. But if OU wins, it will force a three-way tie between OU, OSU and Kansas State. Tiebreakers would send OU to the Fiesta Bowl, but there has been some contention over whether all three teams can claim a conference title.

"All I heard at the beginning of the year from the Big 12 office was we have one true champion since we're all playing each other," Stoops said. "I don't know where that went. If we all play each other, and whoever beats who, that's who the champion is. I know that's how we've always looked at it here."

But for that situation to even be relevant, OU will need to beat OSU, which will be no small task. The Cowboys currently are ranked No. 3 in the BCS, and if not for an upset loss to Iowa State would be in contention for the national championship.

That does not bode well against OSU and quarterback Brandon Weeden, who currently is third in the nation with 4,111 passing yards, more than both Doege and Griffin. Weeden also has an elite target in receiver Justin Blackmon, who is fifth in the nation with 103 receptions.