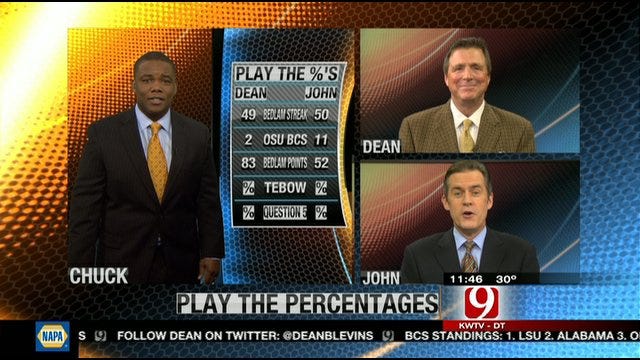 OKLAHOMA CITY -- It's officially been two months for John Holcomb and the Play the Percentages Trophy, but heading into Bedlam Week Holcomb faces another stiff challenge from Dean Blevins. Will John keep the trophy in Tulsa or will Dean bring it back to the other end of the turnpike?

No. 3 Oklahoma State and No. 10 Oklahoma are squaring off in perhaps one of the most high-stakes games in recent history. Oklahoma has won eight straight, and what are the chances that the Cowboys can snap the streak?

Heading into Bedlam, both Oklahoma and Oklahoma state sit in the top 10 nationally in scoring defense. The teams combined for 88 points in the game last year, what are the chances the game lives up to that lofty point total?

Denver quarterback Tim Tebow is 5-1 as a starter this year, sitting one game out of the AFC Wild Card race. What are the chances that you would have believed them at the beginning of the season?

Former Florida head coach Urban Meyer is seems to be set to become the next head coach at Ohio State. What are the chances that Mike Stoops will be his defensive coordinator?