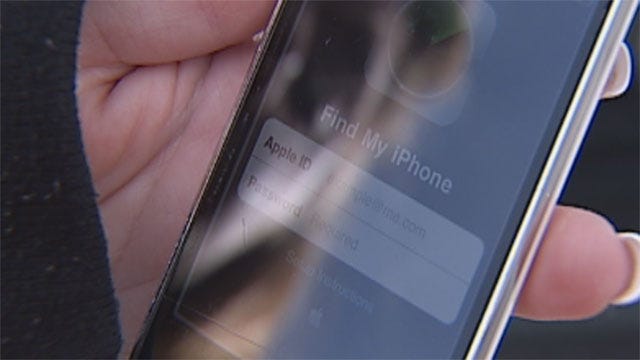 Unsuspecting parents are making easy targets for criminals. Police are investigating a rash of thefts at metro daycares. It happened Tuesday morning in Southwest Oklahoma City.

The mother left her purse in an unlocked car. The thieves took off with her purse, but what they didn't know, the victim was able to track their every move using her iPhone.

Johnson never expected a couple minutes inside her kids' daycare would make her a target for thieves.

"When I came back out to my truck, my purse was gone," Johnson said.

And inside her purse was the key to catching the criminals. The other piece was in her hand. Johnson has an app on her phone called "Find My iPhone". It can also track her iPad.

"You can do satellite or you pull it up on a map," Johnson said.

She stayed at the daycare and led her husband and police to a house in a southwest Oklahoma City neighborhood. That's where the officer found her purse and the two suspects.

"He was amazed ‘cause it showed it to be located in the garage of the house," Johnson said.

Johnson said the two suspects turned off the iPad.

"I think maybe they thought maybe I couldn't track it that way, but it still worked," Johnson said.

Now the alleged thieves are in jail and Johnson's purse is back with her. She hopes others can learn from her mistake.

"Don't leave their purse in their car that's the first thing. Definitely put this app on their iPad and on their phone ‘cause you can maybe find it. For me it definitely worked out," Johnson said.

From the time Susan's purse was stolen to the time she got it back, it took less than two hours.

The alleged thieves could face charges of concealing stolen property and burglary.