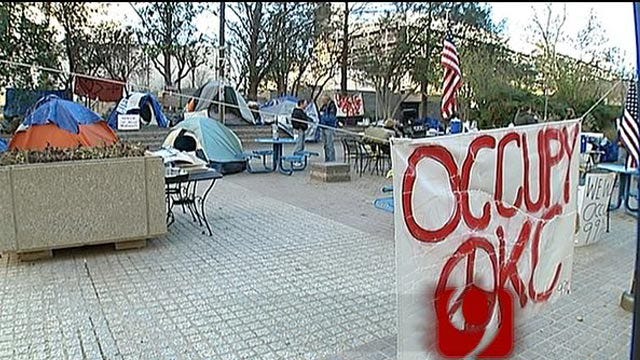 OKLAHOMA CITY -- The Occupy OKC protest is costing tens of thousands of dollars of our tax money. It's all so the city can keep the peace at Kerr Park and that's keeping police busy.

On most days the Occupy OKC camp is quiet. Patrol officers keep watch over the area day and night, but those hours are adding up.

Police officials say the total cost to the police department has been $58,583. More than $13,000 of that is overtime pay.

Some of the Occupy OKC protesters living in Kerr Park were surprised at the amount.

Occupy OKC leaders say that's not any more than the city would normally have spent.

Mayor Mick Cornett addressed movement members at the city council meeting Tuesday morning. He made it clear why the city wants the tents cleared out of the park.

"We can't allow people to liver permanently in our parks. I think we would all agree there. We have limited police funds and we have to use them to protect everyone in the city," he said.

While protesters say their movement is peaceful, police have responded to 27 9-1-1 calls.

One was a death from a drug overdose. Officers have also made arrests for public drunk. Then an incident happened over the weekend where the camp was ransacked.

"There have been some problems in the last couple of weeks and because of that, we don't believe 24-hour camping down there is in anyone's best interest," City Manager Jim Couch said.

The fire department has also incurred about $250 dollars in response-related costs.

They city does not know how much it will cost them to clean up the area once protesters leave.