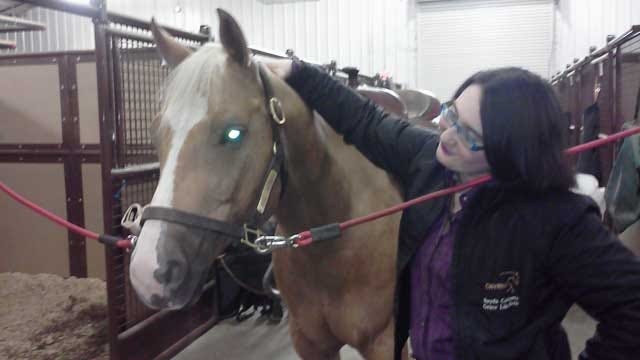 OKLAHOMA CITY -- Sayda Canizares grew up riding horses, but she found herself working in the World Trade Center on a beautiful September morning--a morning that would change her life forever: September 11, 2001.

Canizares was inside one of the towers when it was struck by an airliner flown by a terrorist.

"One of the thoughts that went through my head was ‘I'm going to die doing a job I don't love doing. And I quit and gave up horses. Why did I do that?"

Though her life will never be the same, Canizares decided to take the reins, make some changes and reclaim her life.

She is set to make her rookie debut in a horse reining competition in Oklahoma City this week in hopes of overcoming her fears and helping others get back in the saddle.

"These reining horses, you say ‘Whoa!' and they whoa. She knows what I'm feeling up there and responds to it…just a good girl."

Canizares makes it look easy, but the turns and tricks were not always this easy for the pair to pull off.

"I had to relearn. I was like a flight or fight response. So was she."

"Deep breath and say ‘No terrorist attack. It isn't happening. It's just a can falling off the bench.' It's taken time."

Horse trainer Jennifer Boyd says if a beginner student falls off, the lesson is to suck it up and get back on.

"I knew something had happened [to Canizares]," Boyd said. "I didn't know exactly what."

It took a horse named Grace Like Rain to help Canizares take life by the reins once again.

"She felt a connection with Rainy," Boyd said.

"Sometimes it's hard to talk about, but I think it's important to," Canizares said.

"Something about a horse will allow a person to open up," Boyd said.

"She and I are like a team now. It took a while, but…" Canizares said.

"I think it was Churchill who said ‘There's something about the outside of a horse that's good for the inside of a man."

Canizares competed with Rainy and about 60 other rookies in the arena Thursday.

With her husband and friends by her side, no one cared about scores. They were just happy to see Canizares is riding again.