Sheldon Wilson And Kent Jackson After The Championship Win 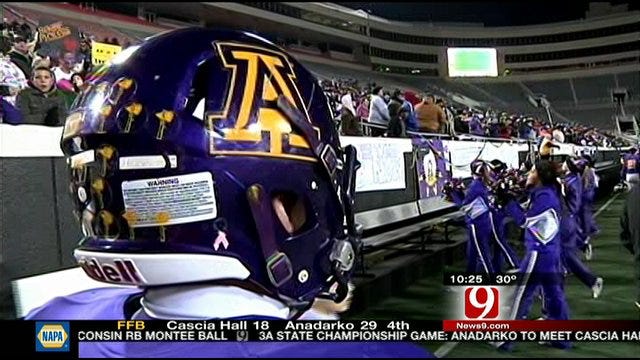 STILLWATER, Oklahoma -- Anadarko capitalized on Cascia Hall miscues in the second half to score four unanswered touchdowns and come away with a 35-18 win over the Commandos Friday to claim their first-ever Gold Ball.

Senior running back Sheldon Wilson was a workhorse on the night once again for the Warriors, amassing 223 all-purpose yards and scoring five touchdowns, setting a state single-season record in the process.

The Warriors trailed 18-8 at halftime, but that's when the turnover bug bit the Commandos. They fumbled on their first drive of the second half. Anadarko quarterback Tyler Melton connected with Wilson who cut back across the field to score to cut the deficit to just three points.

On the ensuing drive, Cascia Hall botched a quarterback-center exchange and Anadarko recovered at the 13-yard line. Five plays later, Wilson punched it in from six yards out to give the Warriors a 22-18 advantage late in the closing minutes of the third quarter.

The touchdown was his 55th rushing touchdown of the season, breaking the record previously held by Gerald Jones of Pawnee.

Early in the fourth quarter, Cascia Hall fumbled yet again and the Warriors recovered on the 25-yard line. Wilson punched it in a few plays later from three yards out to take a 10-point lead in the closing minutes of the game.

The Commandos once again were unable to get the job done and Anadarko took over at their own 35-yard line. Wilson took a handoff around the right side, broke a few tackles, cut back across the field and 65-yards later scored to take a 35-18 lead.

Cascia Hall attempted a late-game comeback, but Wilson made his impact on defense and intercepted Thomas Rouse to end the threat with less than 90 seconds on the clock. The Warriors kneeled out the clock to end the game and claim the Gold Ball.

The loss was the Commandos' first of the season, and denied Cascia Hall its fourth state championship in the last five years, while Anadarko capped off a 15-0 season.