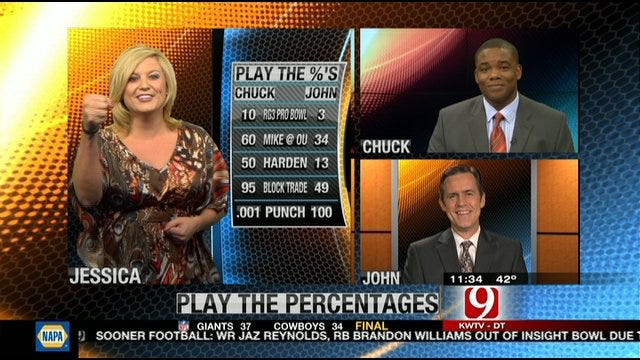 OKLAHOMA CITY -- With Dean Blevins temporarily on the mend, it was up to sports anchor Chuck Fisher to try and unseat Tulsa sports director John Holcomb as the Play the Percentages champion. Would Chuck play giant killer or would John's reign continue to keep the cup in Tulsa?

Robert Griffin, III claimed the 2011 Heisman Trophy over presumptive No. 1 pick Andrew Luck, the first stiff-arm trophy for the university. What are the chances that RGIII will be a Pro Bowl quarterback in the NFL?

The Oklahoma defense was questionable at times and defensive coordinator Brent Venables has come under scrutiny. What are the chances that the currently unemployed Mike Stoops will join him in Norman to coach the defense?

In his second season with the Thunder, James Harden was officially the sixth man and played major minutes for Oklahoma City. What are the chances that the bearded shooting guard will get the start over defensive specialist Thabo Sefolosha?

After a trade went through that would send Chris Paul to the Lakers, the NBA blocked the trade due to "basketball reasons." What are the chances this was the right move for the NBA?

The Xavier- Cincinnati game ended early and was marred by a brawl with just nine seconds left on the clock. What are the chances that either anchor had thrown a punch in an athletic event?