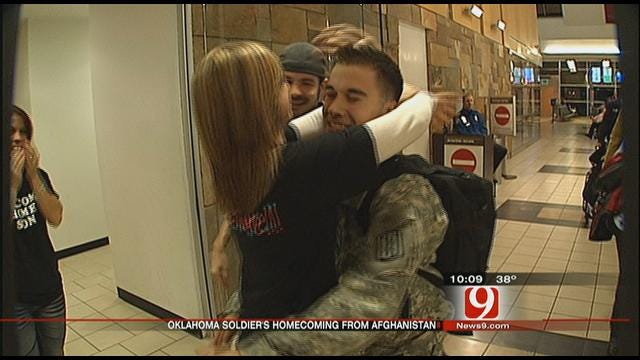 OKLAHOMA CITY -- A U.S. Army corporal is back on Oklahoma soil, eager to spend the holidays with family, friends and one very special girl.

Cpl. Drake Francis just got back from a 13-month deployment in Afghanistan with Charlie Company Task Force-Infantry.

His flight touched down around 6 p.m. Saturday, where he was surprised by dozens of family members and friends armed with balloons, pictures and t-shirts they made in his honor.

They had talked about dating, but that was before the soldier was to serve in Afghanistan for more than a year. Where could that go?

A long way. The two fell in love on-line and on the phone.

Their first kiss was celebrated Saturday at Will Rogers World Airport in Oklahoma City--in front of everyone.

"Nerves, excitement, I'm' just ready for him to be here," Brandy said shaking, She was nervous.

Family and friends at the airport were all waiting to see their soldier, but also his first kiss with girlfriend Brandy.

Francis's feelings grew stronger for the girl he wanted to date before being called to war.

"You know how everyone pictures you run and they kiss? I am afraid I going to fall or something," Brandy laughed.

Talk about added pressure. News cameras, passengers and her boyfriend's family were going to share the moment too.

All that build up was almost too much for Brandy.

"We're ready," Brandy said confidently as she got ready and got a text. Her soldier just landed.

When Mom, Christina Correll, saw her son, she could not wait, sprinting to Francis's side before he was even out of the gates.

Raising five kids on her own, with two of them in the Army, this mom has to be tough.

Her son Staff Sergeant Josh Sloan has deployed to Iraq and Afghanistan five times in all.

Christina is a softy when it comes to a great love story. That's why she wants this to be about Brandy and Drake and the first kiss.

"They fell in love over the internet."

It's a great love story for this generation at war.

Then the moment came and everyone cheered and clapped as the couple kissed and embraced.

So how was it?

"It was amazing. I have to say, I have to admit, amazing," Francis said.

The soldier has been thinking about that first kiss with Brandy since he deployed.

Now that he's home, not much is holding him back making the second kiss and the third.

They handled their first kiss great under all that pressure.

The cute couple says they're going to face tougher times. The corporal's unit is stationed in Germany and he has to report back to base in 30 days.

He deployed 13 months ago with about 600 other Army soldiers from the Charlie Company Task Force-Infantry, in Germany.