Sooners Open Duel In The Desert With Big Win 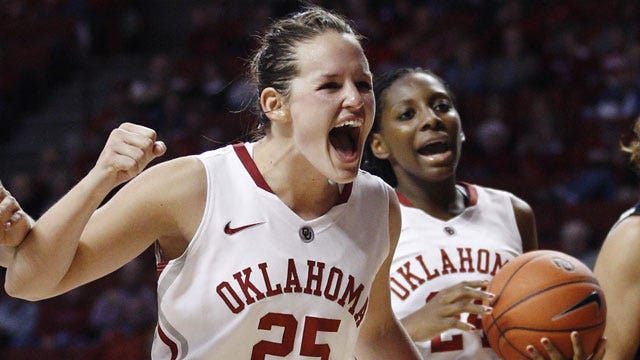 NORMAN, Oklahoma -- The Oklahoma Sooners jumped out to an early lead Sunday and didn't look back, topping the Ohio Bobcats 89-57 to open the Duel in the Desert.

The Sooners opened the game with an 8-0 run, including back-to-back from Joanna McFarland, in less than three minutes. This was part of a larger 12-3 run, capped by a fast-break layup from Morgan Hook, to take a nine-point lead with 13:46 left in the half.

Just one minute later, Aaryn Ellenberg knocked down a three-point basket to put the Sooners on top by 10 points.

That sparked a larger 16-5 run from the Sooners that spanned the next six minutes, giving Oklahoma a 33-12 advantage and head into the locker room six minutes later with a 52-29 lead.

Oklahoma simply maintained its lead in the second half and cruised to the victory.

Sharane Campbell finished with a game-high 19 points and five turnovers, while McFarland and Hook both turned in 14-point performances.

Porsha Harris led the charge for Ohio with 13 points, nine of which came from the charity stripe, with Tenishia Robinson adding 12 in the loss.

Next up for Oklahoma will be the Syracus Orange at 4:30 p.m. Monday in the second game of the Duel in the Desert.

Sooners Open Duel In The Desert With Big Win