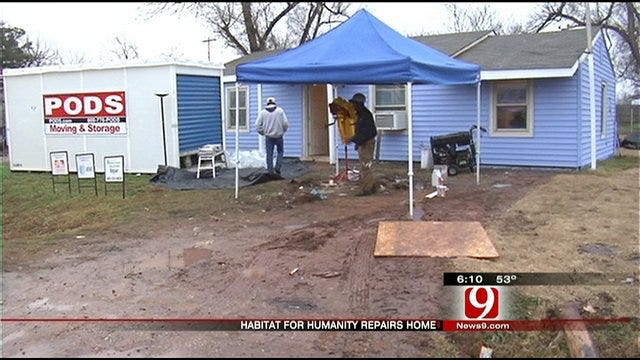 Matching up those in need with those wanting to give is a mission for Central Oklahoma Habitat for Humanity.  Now a new program is reaching out to homeowners in need.

Vernon McDow's home was a prime candidate for some help.

"Bad?  That's a good word," said McDow, referring to his house before.  "I mean, it was really bad."

McDow knew he needed a safe home for his daughters, ages nine, 11, and 15.  So he applied for and was accepted into the Critical Home Repair program.

Workers re-roofed his home, repaired cabinets, carpeted,and even added a small bedroom for his oldest daughter Kasey in less than a week.

Ann Felton has been CEO of Central Oklahoma Habitat for Humanity for over two decades.  According to Felton, the Critical Home Repair program was a needed expansion of Habitat's services.

"We've really been building new homes for the last 20 years," Felton said.  "But over the years we've received so many calls from people that just really needed help in this area."

In addition to the newly remodeled home, AT&T contributed to furnish the house and provide new clothing and bedding for McDow's daughters.

McDow, an Army veteran and single father works as a mechanic, was more than surprised.  He thought the repairs would be minor.

" I don't need anything for Christmas ," McDow said.  "This is more than I could ask for."