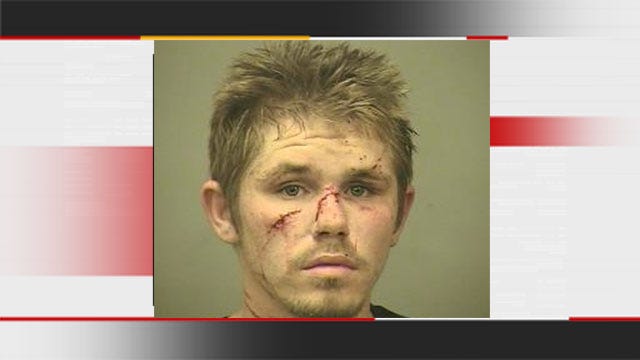 Edmond Police say a man who stole a truck from a bank parking lot first tried to escape officers by vehicle, then by foot.

On Friday, December 16, a man was cashing a check inside the Bank of America near N. Bryant Avenue and E. Ayers Street. He told police he left his F150 pickup truck in the parking lot with the doors unlocked and the keys in the ignition. The victim told police he looked out the window while he was talking to the bank teller and noticed his truck was gone.

The man rushed outside and could hear his truck traveling north on Bryant, due to the loud exhaust. He ran back inside the bank and called 911.

A few minutes later, a police officer at the corner of Bryant and Covell Road noticed a truck matching the description of the stolen. He also saw a driver wearing a red shirt and a stocking cap. The officer attempted to pull over the driver, but the man behind the wheel refused to stop. The officer turned on both his lights and sirens and chased the driver.

The suspect turned down a dead end road near Mistletoe Lane and Glendale Drive. Police said the man jumped out of the stolen truck while it was still moving. The truck slammed into a brick mailbox then hit a tree and stopped.

The suspect ran into a heavily wooded area behind a house. Officers chased him for several minutes, and finally located him trying to hide between two trees.

Officers arrested Marc Allen Lathrop, 23. They said he was out of breath, sweating, and had numerous cuts on his face from running through the woods.

Officers said when they searched Lathrop they found a stun gun in the pocket of his jeans. They also found $300 the victim reported was missing from his truck. When officers searched the wooded area, they also found the red shirt the suspect had discarded along with several credit cards and a cell phone belonging to the victim.

Lathrop was booked on complaints of auto larceny, obstructing an officer, attempting to elude an officer, and possession of an offensive weapon while committing a felony.