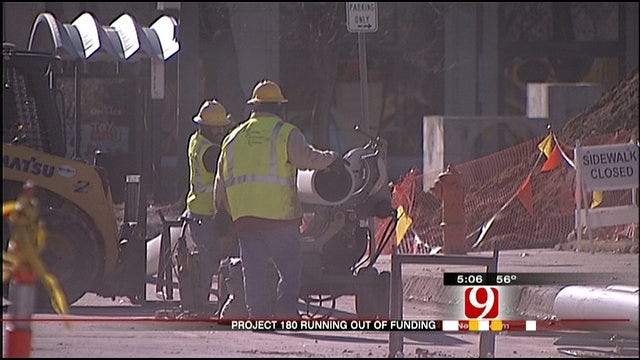 A makeover for downtown Oklahoma City streets is getting ugly. The city has run into several obstacles including lack of funding. Now it's cutting projects.

The ongoing construction has some of us avoiding downtown, but for those who have to come down here, they are finding ways to work around the mess.

It's noisy and dirty. And now it's right outside the front doors of the Oklahoma City Museum of Art, where Leslie Spears works.

"We were hearing the jackhammer in a new place," Spears said. "We're just dealing with it and getting used to it. Like a train."

Construction has taken over downtown Oklahoma City streets and parking. It's Leslie's job to keep museum patrons informed of any obstacles.

This is all part of the city's Project 180, a plan to update and beautify downtown streets. Reno is one of the first completed streets.

But construction like this will continue past the 2014 completion date. The city has hit several snags that are holding up progress. So the city has cut five streets and sidewalks from the improvement project.

Another unexpected complication and expense, crews are running into utility lines, and having to replace old pipes.

Not everyone is happy with the construction. But this downtown employee calls it growing pains.

"We've been through this before, the museum has been a construction zone, we're used to it. We can handle it ‘cause the future is bright," Spears said.

City leaders say the projects that were cut could be added in the future, if there is enough sales tax revenue.

Devon loaned the city $95 million to start Project 180. The city is still looking for financing to pay the money back.