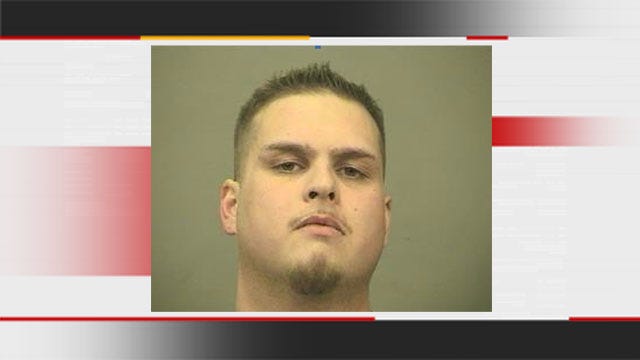 A Del City man was arrested Sunday afternoon after an off-duty officer spotted him with a gun in the parking lot of a Wal-Mart store in Edmond.

Dustin Paul Ortega, 26, was arrested on complaints of resisting officers, a felon in possession of a firearm, and carrying a concealed weapon.

According to the Edmond Police Department, an off-duty Bethany officer saw a man in the parking lot of Wal-Mart, located at 1225 West I-35, getting out of a white truck with a gun tucked in his waistband.

The officer said he also saw a "405" tattoo on the man's forearm, and described him as a South Side Loco gang member.

Police said the officer contacted Edmond police as the man started walking to the store with another woman. Officers located the man, later identified as Ortega, in the store, but they did not find the weapon after an initial pat-down on him.

Police later found out Ortega was formerly involved in several prior incidents, including a second-degree burglary, assault and battery with a dangerous weapon, domestic assault and battery, and false declaration to a pawn broker. Police said Ortega did plead guilty to all counts of charges for those incidents.

According to police, Ortega originally told officers his mother had dropped him off at the store. However, officers located the woman who was seen walking to the store with him. She told police she is Ortega's wife and they had driven to the store together.

Officers then searched the truck the two were seen getting out of and discovered a silver pistol with a black grip underneath the driver's seat. Officers also found illegal drugs in the center console area of the truck.

Ortega is currently being held at the Oklahoma County Jail on $25,500 bond.