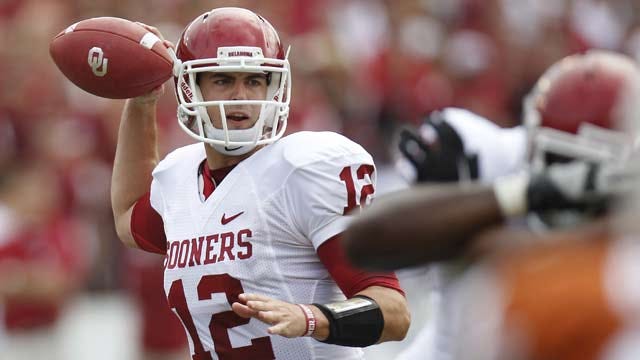 The University of Oklahoma announced Thursday that quarterback Landry Jones would be putting off the NFL for one more season and returning to quarterback the Sooners for the 2012 season.

"I want to accomplish the goals that I set before I got here, and there is still a lot more to do," Jones said in a press release. "I enjoy being at OU and with my teammates and look forward to graduating with the guys that were in my class when I got here."

In his junior campaign, Jones passed for 4,463 yards, good enough for third in the NCAA, throwing 29 touchdowns and completing more than 63 percent of his passes. Jones was considered to be one of the top quarterbacks in the upcoming NFL Draft, behind presumptive first pick Andrew Luck and Heisman winner Robert Griffin, III.

"That's the ultimate goal for anyone who plays football," Jones said. "I've thought about that since I was a little boy. It would be a great honor to play in the NFL and that goal will still be there when I finish at Oklahoma."

In the same release, head coach Bob Stoops said he was pleased with Jones' decision, bringing back a senior leader to a squad that will be loaded with talent in 2012.

"We know the positive influence Landry has on and off the field with our team," Stoops said in a press release. "We're excited that he's coming back to build on what has already been an outstanding career. We expect another great year from him, and like the fact that he's determined to be even better."

The Sooners finished the season 10-3, including closing the season off with a 31-14 win over the Iowa Hawkeyes in the Insight Bowl. With Jones at the helm, the Sooners are 3-0 in bowl games, including their first BCS win since the 2002 Rose Bowl.