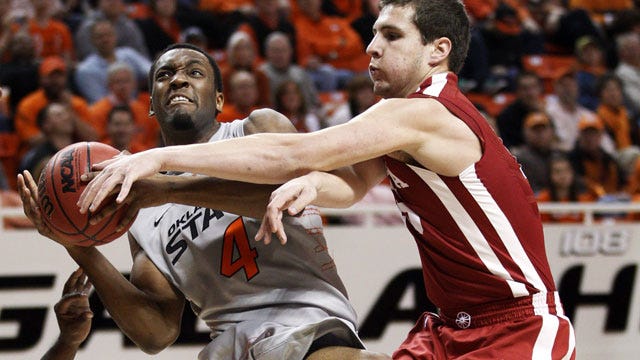 STILLWATER, Oklahoma – It might not have been the pretty, high-profile type of Bedlam game that fans have experienced in the past.

But for Oklahoma State, all that matters is a big check mark in the win column and a boost of confidence going forward.

The Cowboys handled the Sooners in most aspects of the game on Monday night, coming away with a 72-65 victory at Gallagher-Iba Arena.

OSU had a good defensive game plan coming in, despite having just a day to prepare. But the Sooners certainly helped OSU out with some poor shooting.

OU shot 32 percent from the floor and 23.5 percent from 3-point range. The Sooners had more turnovers in the game (10) than assists (seven).

But the Cowboys didn't exactly do themselves any favors on the offensive end either. OSU shot a slightly-better 38.6 percent, but still only 25 percent from 3.

The Cowboys eventually pushed the lead to double digits and owned a 35-22 advantage at halftime, thanks to 11 first-half points from forward Le'Bryan Nash. OSU moved to 7-0 on the year when leading at halftime.

Oklahoma State led by as many as 17 in the second half but the Sooners made a bit of a late run to make it interesting.

A 3-pointer from Romero Osby cut the lead to 66-61 with 40 seconds remaining, but OSU was able to hit its share of free throws down the stretch.

Nash had 21 points to lead the Cowboys, while Keiton Page added 18. Guard Brian Williams had 13 points for OSU to mark his third double-digit scoring night in the past four games.

Guard Carl Blair led the Sooners with 20 points. Romero Osby had 18 and Andrew Fitzgerald had 12.

Steven Pledger was held to nine points and finished the game in single digits for the first time this year.

Blair and Osby both had 10 rebounds for the Sooners, who rebounded the ball extremely well despite the loss.

OU registered an unheard-of 21 offensive rebounds in the game but failed to convert many of them into second-chance points.

The Sooners (10-5, 0-3) have lost three straight to open conference play, and will face a tough task in hosting Kansas State at 12:30 p.m. on Saturday.