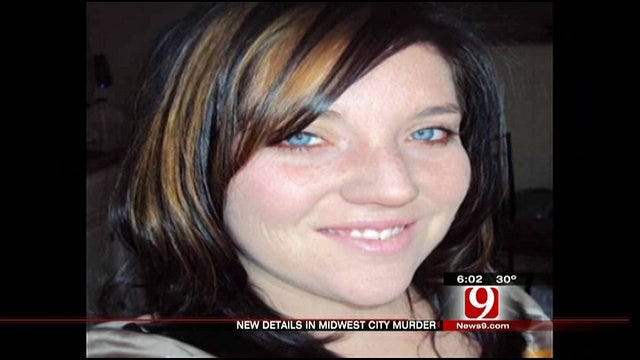 Friends of a mother found dead in her home in Midwest City say the woman was expecting her third child.

Dustin and Emily Hefton were devastated to learn their friend is now at the center of a murder investigation.

Police say a neighbor noticed a two-year-old and a four-year-old unattended in the front yard of the home and called 911.

Police say Jessica, her ex-husband, Fabion Brown, and their two kids moved into the house in February 2011. In April, the couple divorced. During the 10 months in the home, officers report 23 calls made to dispatch from the home.

Four reports were filed including a mental intervention with her ex-husband as well as Fabion Brown violating a restraining order and trespassing.

Police say an arson report was made after Jessica reported an in-law setting her car on fire.

With everything Jessica went through in the last year, the Heftons say Jessica always took the time to make her friends feel special. They say her smile was contagious. She was excited about her third child on the way. The Heftons say Jessica just found out she was expecting a little girl and had picked out a baby name.

"What kind of sick person can do this to someone, especially someone pregnant and to leave her two kids all by themselves?"

Dustin Hefton says they have an idea of who committed the crime but, do not want to name anyone until he's certain.

Police say they cannot confirm if Jessica was pregnant and will wait on the medical examiner to make the determination. If that happens, police could be investigating this case as a double murder.

At this point, police have not named a suspect in the case.

Jessica's parents are expected to make a trip from Washington to Oklahoma to pick up Jessica's two children.