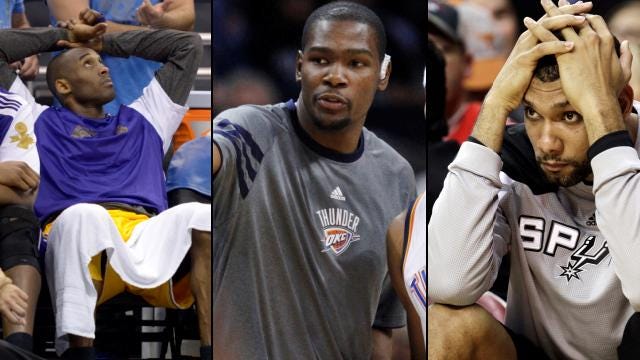 OKLAHOMA CITY – In the NFL, every loss is a big loss. After all, your team only gets one chance every seven days to pick up a victory.

In Major League Baseball, neither an individual win nor a loss is a huge deal in the long run. Your team plays every day, and the teams with the best winning percentages in the entire league usually hover at about 60 percent wins, 40 percent losses.

With about 3-4 games per week, the NBA has always fallen somewhere in the middle.

But with those 3-4 games turning into 5-6 games per week because of the lockout, NBA fans are about to get an ever-so-slight taste of the MLB phenomenon of having to accept a loss as "no big deal."

Teams are disoriented and rusty from the lockout and the lack of prep time. Some teams will post a 40-point blowout win one night only to go out the next night and get hammered by 30 points themselves.

Six games into this compact, frenzied season, there was not a single undefeated team remaining. Only one team remained winless at that point.

The reason being: it's much harder to get up and play hard for every game when those games are coming at you more like a baseball schedule than a football one.

Some teams with "older" superstars or oft-injured players might even have to pick and choose when and where to play their main guys.

When the Spurs play one of the notorious "back-to-back-to-backs," don't be surprised if Tim Duncan's minutes for those three games go down significantly, or if an injury along the lines of a sore ankle keeps him out for the middle of those three games.

When it gets down to the end of the season, don't expect to see a lot of LeBron James and Dwyane Wade, especially if the Heat have already got some home court advantage wrapped up.

It is widely believed that this sort of thinking will give the youthful, energetic Thunder an advantage in a year like this.

Which might (and probably will) be true, but some of the effects are already evident.

Scott Brooks said his team might get in about 15 or so full-on practices this year if they are lucky, because there is hardly any time to practice.

Kevin Durant has played an average of 36.2 minutes per game through 12 games this season, as opposed to 38.9 last season.

So even though Durant is the two-time scoring champ, don't be surprised to see a good number of games this year similar to his 12 point, 26 minute stat line in an easy win against Phoenix or a 21-point, 29 minute line against the Spurs. There's no point in keeping in your superstars when some well-earned rest is more critical than ever.

And on the opposite end, if the Thunder are ever down 18 points in a game entering the fourth quarter, don't be too surprised the starters stay on the bench.

Coaches will certainly earn their pay this season, figuring out how to pick and choose their battles to maximize energy and effectiveness when the games count the most.

The "youth advantage" aura surrounding the Thunder might just be conjecture, but if anyone is going to gain an advantage from the MLB-style schedule, there is no reason it wouldn't be this young Oklahoma City squad.

After all, three wins in three nights and five wins in six nights is no easy task. It's tough to imagine the "old" guys such as Tim Duncan, Steve Nash and Kobe Bryant pulling off the same thing.