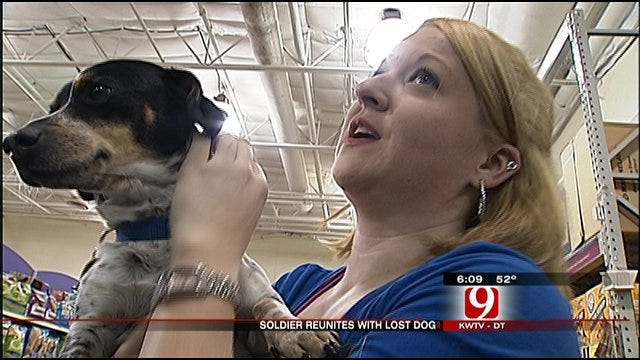 "Oh my God!" cried Senior Airman Crystal Tucker. "Baby, oh you're so excited! Oh my God," Crystal cried Saturday when she saw her dog come around the corner at the PetSmart at NW 63rd and May.

The tale of how this heartwarming reunion was even possible is pretty incredible.

"I got a knock at the door one night and a guy said I have this dog and he's been hit by a car and can you take him in and we said ‘ya'," Bella Foundation President, Eric McCune said.

Mickey was picked up in August without tags or a microchip and could have easily suffered a fate at the pound.

But for five months, he was in good hands. "She had no idea we had him," McCune said.

Lucky for Mickey, he ended up with The Bella Foundation just after they had just started a new program to provide veterinary care to animals whose owners were unable to pay.

"We put up signs, ads on craigslist, posts on Facebook," McCune said. "Nobody ever stepped forward."

Meanwhile, Tucker, who is with the 137th Air Medical Evacuation Squadron, had to deploy to Germany and leave her lost little Mickey behind.

"I had him for four years, and I wasn't ready to give up on him yet,"

Tucker said she never gave up hope. "It was very scary,"

Another dog lover, whose name also happens to be Kristel, took Mickey in and had been fostering the dog she called "Rudy" in hopes the dog's owner would one day be found.

When her deployment was nearing its end, Tucker went on-line from Germany to check before coming back home. Maybe, just maybe…

And she found him.

"They had him listed as Rudy and I was like ‘No! That is Mickey!"

Crystal Tucker made arrangements to meet Kristel Evans and bring Mickey back home.

"Thank you so much!" Tucker said to foster mom, Kristel Evans when they met.

"He's been such a good boy!" Evans replied. "It's been my pleasure."

A happy homecoming for the Air National Guard Soldier got even better just one day after arriving in the states.

"Just to see him come around the corner and just know he'd be back in my arms…It was great!" Tucker said.

There was one last thing Crystal made sure to get before leaving the store Saturday: new dog tags so Mickey will be safe and everyone will know just where he belongs.

"He was just meant to come back home."

The Bella Foundation waived the $150 adoption fee for the soldier; they hope this story also reminds people the importance of adoptions and more importantly, micro-chipping your pets.