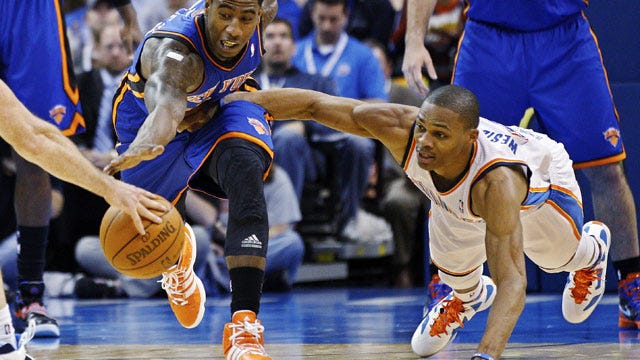 OKLAHOMA CITY – With two days of rest, a big winning streak and no Carmelo Anthony lining up opposite of them, this one was as good as done almost as soon as it started for the Thunder.

OKC once again had a valuable chance to rest its starters in a 104-92 blowout of the Knicks on Saturday at Chesapeake Energy Arena.

The Knicks were missing Anthony, their leading scorer at 25.5 per game, due to an ankle injury suffered two nights before against the Grizzlies.

But even Anthony's presence might not have done much for the Knicks as Oklahoma City turned up the intensity on both sides of the ball.

By the end of the first quarter, Kevin Durant and Russell Westbrook had already gone to town and helped the Thunder to a 32-22 lead.

James Harden took over the scoring spree in the second quarter as OKC quickly began to run away, holding a 70-47 lead at the half. The 70-point total was easily the Thunder's biggest point total in a half this season.

Durant, Westbrook and Harden didn't exactly play a whole lot in the game, but their first half totals were as good as a normal game's output.

Durant had 21 points in the half, Harden had 19 and Westbrook had 13 points eight assists and five boards in the half.

Once again, every active player on the Thunder roster took the court and got decent minutes in an all-around effort.

With Carmelo Anthony out, the Knicks' Amar'e Stoudemire took the responsibility on himself to score, but the Thunder defense was able to bottle up Stoudemire quite effectively. He shot 7-for-19, finishing with 14 points, which tied for a team high with Tyson Chandler and Toney Douglas.

Durant finished with 28 points in 27 minutes, and Westbrook fell short of a triple-double with 21 points, eight rebounds and eight assists. Harden finished with 24 points while no OKC played reach the 30-minute mark.

OKC's schedule is lightening up a bit from the five-game in six-day stretch it experienced recently. The Thunder will have another day off tomorrow, giving them three days off in a span of four.

The Thunder will hit the court again at Boston on Monday night for a 7 p.m. tipoff, nationally televised on TNT.