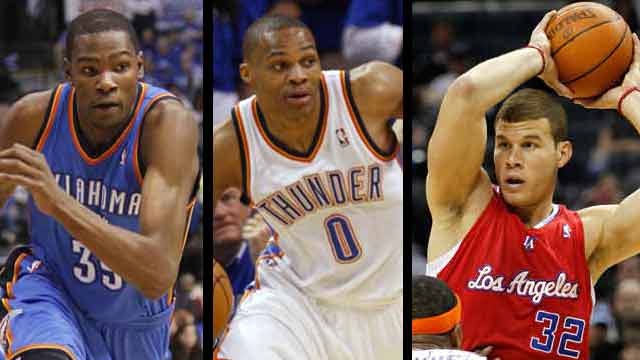 Thunder stars Kevin Durant and Russell Westbrook along with Oklahoma native Blake Griffin, have all been named finalists for the 2012 U.S. Olympic basketball team.

"This will be the most talented of the teams that I've had the opportunity to coach," said head Olympics coach Mike Krzyzewski.

Durant was named World Championship MVP on the 2010 USA World Championship squad that went 9-0 and captured gold in Istanbul, Turkey. His involvement in USA basketball began in 2006 when he was named a member of the U.S. team at the Nike Hoop Summit. Since that time, he competed in the 2007 State Farm USA Basketball Challenge as well as participated in the National Team training camps.

So far this season Durant averages 25.8 points and 6.8 rebounds per game while shooting 50.6 percent from the field for the Thunder.

Westbrook, most recently was a member of the 2010 USA World Championship squad that won gold in Istanbul. He also participated in the 2009 USA Men's National team mini-camp after being named to the USA Basketball Select team in 2008. Westbrook is averaging 18.9 points and 5.5 assists on the year so far for OKC.

Griffin had not been on the list of possible participants until earlier this month. Griffin is averaging 23.1 points and 11.1 assists per game for the Los Angeles Clippers.

The 2012 Summer games will be held in London, England from July 27-August 12 with twelve teams competing in the 2012 Olympic men's basketball competition.