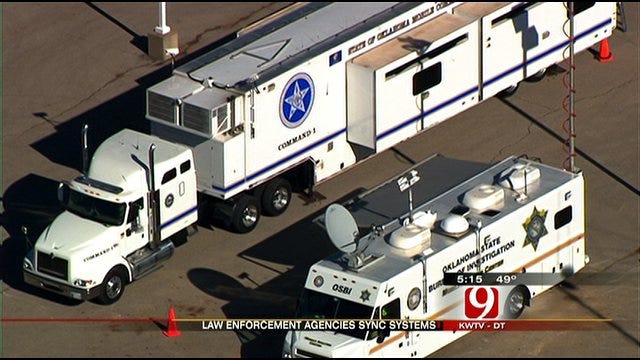 Never before have emergency communication crews from around the state come together in one spot.

They did Thursday, but not for a disaster, but for a first-ever communications exercise.

Mobile command units from Tulsa to Oklahoma City, from the local level to the federal, all deployed to one location.

"This is the first large-scale communications exercise we've had here in the state of Oklahoma," said Taran Groom of the U.S. Marshals Service.

The Marshals Service rolled out their state of the art truck to test if their equipment works in sync with the other agencies.

This one of a kind unit responds to manhunts, missing persons, and domestic terrorism--any kind of law enforcement event where communication is needed.

"We have a whole radio communications center here and we have all the computer satellite links like that so we can get outside the truck," Groom said.

The state's Command One is also taking part in the exercise. This truck was bought by the Office of Homeland Security and provides support during emergency situations. Most recently it was used during the northeast Oklahoma City wildfires.

The chance of all these units being in the same place at one time is unlikely, but an event like this is invaluable.

"It is important to have exercises, occasionally bring all the resources together to see how we communicate from one unit to the next if we end up at a disaster scene," said Lieutenant Chad Bradley of the Oklahoma Highway Patrol.

The state's Command One unit is primarily used by the OHP, but can be utilized by any agency during a major event.