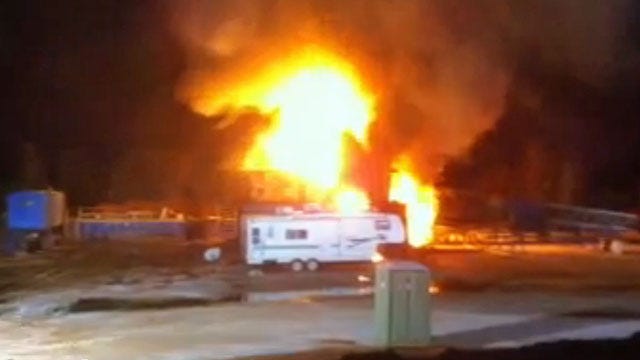 MARSHALL, Oklahoma -- An oil rig explosion near the town of Marshall in Logan County sends four people to the hospital Saturday night.

The explosion happened Friday night just around 7 p.m. Crews with the oil company have contained the fire and are working to cap the well.

The Marshall Fire Department responded to the blaze but turned the well back over to the oil company about 2 a.m.

Kirkpatrick Oil Company attorney Jeremy Fitzpatrick told News 9 that the cause is still under investigation.

Great White Pressure Control was dispatched to help with clean up.

Firefighters from the towns of Douglass and Marshall assisted at the scene.

The identities and conditions of the four injured workers have not been released.