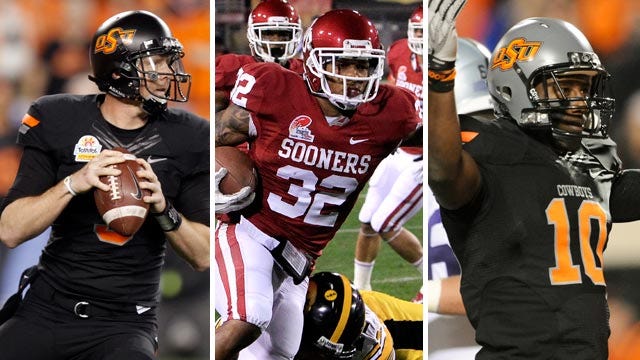 The NFL Draft is more than three months away, but college seniors are getting their final chance to show NFL scouts what they can do in-game at the 2012 Senior Bowl. Oklahoma State's Brandon Weeden and Markelle Martin will suit up for the South Team, while Oklahoma's Jamell Fleming will take the field for the North Team.

Perhaps the top-ranked player of the three in-state players, Martin is currently the top-ranked safety in the upcoming draft class, and is projected to be a late second-early third round pick. Martin was a two-year starter for the Cowboys, but appeared in 22 total games before his junior and senior campaigns. In 2012, Martin notched 74 total tackles, 55 unassisted, and forced two fumbles.

Fleming, who missed two games due to a knee injury his senior season, still finished the season with 60 total tackles, good enough for fifth on the team, two interceptions and 10 passes broken up. The senior, who was a four-star recruit when he committed to the Sooners, is currently projected to be a late third-early fourth round selection in the draft.

Weeden is coming off of a record-setting career with the Cowboys, nearly doubling his overall career production in his senior season at Oklahoma State. In just two full seasons at a starter, the Edmond native owns every major single-season and career passing record for the Cowboys, passing for 9,260 yards, 75 TDs and just 27 interceptions, while completing nearly 70 percent of his passes. Weeden has been projected to be selected anywhere between the fourth round and going undrafted varying on the service.

The Senior Bowl kicks off at 3 p.m. Saturday in Mobile, Ala. and can be seen on the NFL Network.