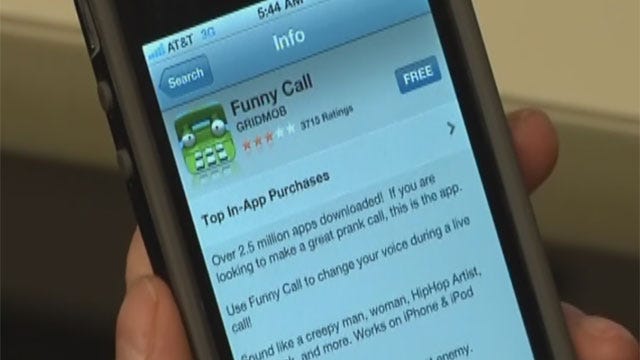 Smartphone apps can help keep us organized, entertained and up to date on the latest news, but they're also being used to stalk and harass people.

An app dubbed the "Funny Call" app is not living up to its name for those who have been on the receiving end of its calls.

For the past few weeks, Carrie Mason has received calls from the iPhone app which allows a person to call from a generic, untraceable number and use a voice changer to pull "pranks" on people.

"I would just hang up and they would call me back, really mad this time, and say ‘Don't hang up on me!'" she said.

The calls started out with the person on the other line saying Mason's name, and asking if she wanted to hang out.

It then quickly escalated to the caller explaining what they saw Mason doing as she was on the phone with them.

It now has Mason scared to do normal, everyday things.

"I'm fine. I don't think about it when I'm, like, here and safe around people, but when I'm going out to my car, I don't like to. Or, taking out the trash; I don't like to do that now. I'm just scared."

Apps such as this one are becoming more prevalent.... but police say calls like these are illegal.

"It's against the law for anybody to make an annoying, harassing phone call from one person to another, regardless of how that's done, how that message is relayed," said Officer Sam Clemens of the Sioux Falls Police Department.

It doesn't matter if it's a call, text or voicemail, if you receive a threatening message, police want to hear about it.

"If someone receives something like that and are concerned about it, they need to call police and let us know about it," Clemens said.