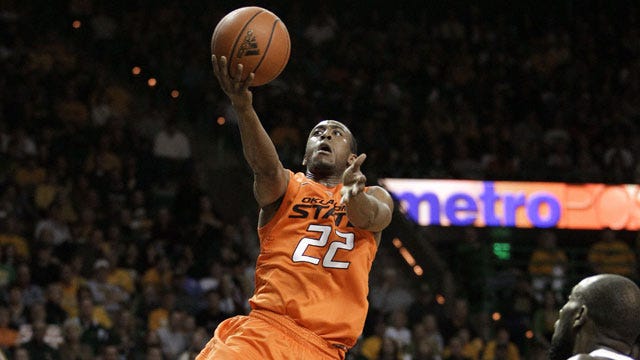 COLLEGE STATION, Texas – No matter how well OSU plays in any given game, it just can't seem to pull it off twice in a row.

Three days after upsetting No. 2 Missouri at home, the Cowboys faltered at Texas A&M, dropping a 76-61 contest to the Aggies on Saturday.

The Cowboys missed big man Philip Jurick, who sat out of the game with a left foot injury, and his defense.

The Aggies took advantage of the situation by shooting 58.3 percent from the field to Oklahoma State's 38 percent.

A&M made six more total field goals than the Cowboys despite taking 10 fewer shots than them overall.

OSU was also hampered by foul trouble with Keiton Page, Michael Cobbins and Markel Brown all reaching four before the game was over.

The Cowboys jumped out to an early lead in the contest and held it for the majority of the first half.

At one point, freshman Le'Bryan Nash hit three straight shots and then assisted on a fourth to give the Cowboys a seven-point lead at 23-16.

But the Aggies clawed back in it and a pair of free throws from Elston Turner put A&M up one point at the break. Turner had a huge day for the Aggies, posting 23 points to lead all scorers.

OSU's last lead of the game came at 35-33 in the second half before a huge run from A&M put the game away for good.

The Aggies outscored the Cowboys 16-1 over the next five minutes of the game to lead by 13 with less than 12 minutes to play.

Markel Brown was OSU's most efficient scorer, coming off the bench to put up 19 points. Brian Williams had 14 and Le'Bryan Nash had 13 to go with seven boards.

Keiton Page had a rough shooting day, going 2-for-13 from the field and 1-for-8 from 3-point range. The Cowboys shot 19 percent from beyond the arc.

OSU will travel to Texas Tech for a Tuesday evening 7 p.m. tipoff against the Red Raiders.