Pledger Leads Sooners To Another Win Over Kansas State 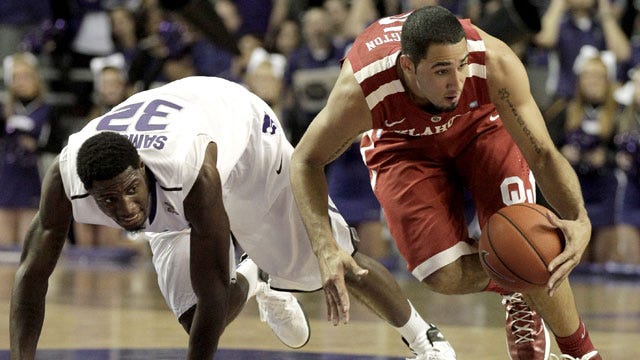 MANHATTAN, Kansas – The Oklahoma Sooners set out to prove that their Jan. 14 victory against then-No. 18 Kansas State was not a simple fluke.

For the second time in two weeks, OU outplayed the Wildcats at both ends of the floor in a 63-60 road victory on Saturday.

The Sooners held off a late K-State charge at the end by forcing turnovers and hitting clutch free throws.

OU led by as many as 10 several times, but the Wildcats had the game back to within one point with 30 seconds remaining.

With 10 seconds remaining, Kansas State's Jordan Henriquez pulled down a defensive rebound off a miss by Sam Grooms, giving the Wildcats possession with a chance to win the game.

But Grooms immediately stole Henriquez' outlet pass right back and the Wildcats were forced to start fouling.

A last-ditch 3-pointer from Kansas State's Rodney McGruder bounced off the back of the rim, securing the OU win.

Steve Pledger was the main man for the Sooners, scoring 30 points on 11-of-17 shooting and five rebounds. Pledger hit four of his seven 3-point attempts and went 4-for-4 from the free throw line.

The Sooners' pressuring defense forced the Wildcats to pay for their mistakes. KSU turned the ball over 20 times – 12 of them OU steals.

OU led by six points at the half thanks to a 3 from Pledger with only seconds remaining.

The Sooners shot better than 50 percent in the first half before their numbers plummeted to 40 percent on the game and the defense was forced to take over.

Cameron Clark was the only other Sooner in double figures with 11 points to go along with six rebounds.

Pledger Leads Sooners To Another Win Over Kansas State