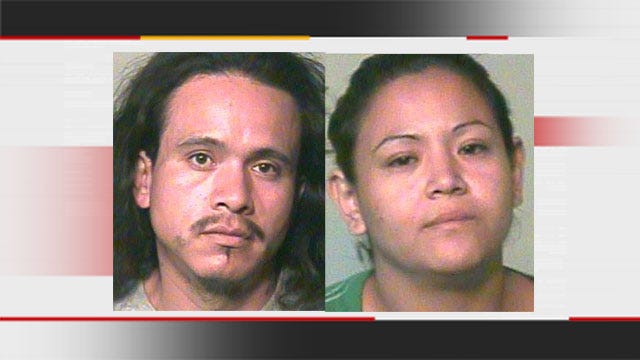 An Oklahoma City couple has been arrested on child abuse charges after police discovered their three young children living in a filthy house in southeast Oklahoma City.

Oklahoma City Police responded to a call about a trash fire in the 500 block of S.E. 12th street. When they arrived, they found a fire in a round metal barrel in the backyard.

When firefighters went to knock on the door, they discovered three boys, ages seven, eight, and eleven inside the house. They were home alone without any adult supervision.

There was no refrigerator and no consumable food throughout the house. The report states that in the back yard, there was a plastic bucket that was being used as a toilet and there were human feces in the bucket.

Officers observed a mattress on the floor of the bedroom, heavily soiled with dirt and grunge. The boys looked as if they had not bathed in several days and had scratches on their arms and legs, according to police.

Police tracked down the couple's other three children and also placed them in protective custody. Two of them, ages two and four, were with a grandmother.

The sixth child, a 3-year-old, was with the parents when police located them. The father tried to run away from police while carrying the 3-year-old, but police caught up with him and the kid.

All six children are boys. They were taken into protective custody.

Both Maria and Teodoro Sanchez are being held in the Oklahoma County jail on $10,000 bond.