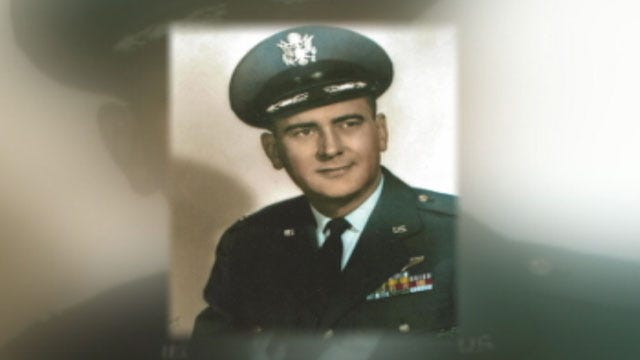 After 44 years of not knowing Lt. Col. Clarence Finley Blanton's family says they finally have some closure Thursday night.

"I want to remember my dad as a person...as he was," Karen Daughety said.

Daughety was 21 years old when she was notified her father, Air Force Lt. Col. Clarence Finley Blanton was missing in the Vietnam war.

"You know about it, but you just put it behind you because you don't' think anything going to come of it so it just sits in the back of your mind," said Daughety.

"I don't' really know him that much I know he was in the Air Force through WWII, Korean War and portions of Vietnam," Ethan Mathews, Lt. Colonel Blanton's great-grandson wants to learn more about his pilot family history and hero.

The family is learning more about how their Air Force hero was killed fighting for our freedom.

"My dad was supposedly reaching in his back pocket to get his ID out and he and two other men were shot point blank," Daughety said. "Then he and nine others were thrown off a 5,000 foot cliff."

Patriot Guard, local police and old friends escorted the soldier back to his hometown and final resting place in El Reno.

"I've actually shed more tears in the last three weeks than I ever have," Daughety said. "I'm just happy to have my dad back.  He gave his life for what he believed in that's it in a nutshell."

The funeral for Blanton will be Saturday in El Reno. His next of kin, his wife, is on her way to meet up with family at the funeral in El Reno. That pilot's funeral will be 10 a.m. Saturday at the El Reno Cemetery.  A flyover will also take place during the service.