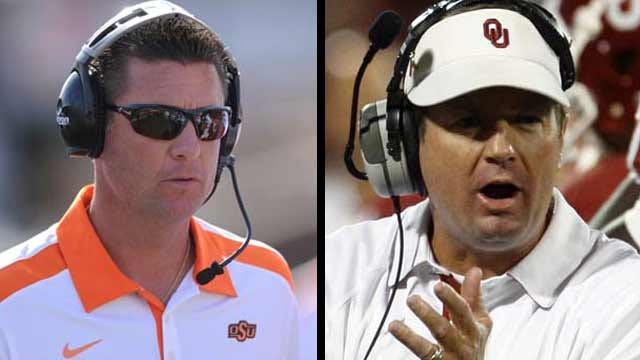 Now that Big 12 play has begun, we will release a weekly Big 12 Power Ranking to keep tabs on what's going on around the league. This is likely to get shaken up quite a bit as the conference has shown itself to be arguably the nation's deepest league 1-9 after the first three weeks of the season. The big game this weekend is obviously Oklahoma vs. Kansas State in Norman but a meeting between unbeaten Texas Tech and Iowa State, as well as, a dangerous road trip for Baylor are games to keep an eye on.

The Big 12 newcomers are off to a potential record-breaking start in their second year under former Oklahoma State assistant Dana Holgorsen. Heisman hopeful QB Geno Smith has thrown for 734 yards and nine touchdowns with zero interceptions through two game … oh, and he's completing a ludicrous 88 percent of his passes. The Mountaineers haven't been tested yet after blowouts of Marshall and James Madison but they have done everything that's been asked of them in impressive fashion. They face a struggling major conference school in Maryland this Saturday, which could provide a better glimpse at just how good WVU is.

The Sooners have played twice and, just like the Mountaineers, haven't played an opponent up to their talent level but all that changes on Saturday. OU's lackluster opener against UTEP is still on people's minds but a thorough beating of No. 15 Kansas State would go a long way toward restoring confidence in Oklahoma's national title aspirations. OU rarely loses in Norman under Bob Stoops and it has never happened against a ranked opponent. If that trend continues, this could be an early statement game for Stoops' troops.

For the past few years the same question gets tossed around early in the season: "Is Texas back?" But the difference so far this season is that there are no indications thus far to believe the Horns aren't back. Texas has handled its three opponents with ease and a dominating defense, most impressively in its 35-points beat down of Ole Miss on the road. Texas has a bye week before a Sept. 29 meeting with OSU in Stillwater. We'll know much more about Texas at that point but so far, so good for UT.

Kansas State would likely have been No. 3 had this ranking started last week but a lazy, mistake-filled 14-point win against North Texas does not inspire much confidence. K-State does have an impressive 52-13 whooping of the Miami Hurricanes to its credit but to prove it's for real in the Big 12 it will have to play much better against No. 6 Oklahoma than it did on Saturday. Collin Klein can cause a lot of headaches but he needs others to step up around him in order to make the offense worthy of conference title contention.

What a difference a week makes. After a dismal performance in Tucson, Ariz., OSU rebounded with a 64-24 thumping of a solid Louisiana squad. OSU leads the nation in scoring (62.3) and total offense (686.7) and set a school record for total yards (747) against the Cajuns despite losing starting quarterback Wes Lunt to a knee injury on the game's first drive. Safe to say the offense is humming along just fine in the post-Weeden2Blackmon era. Lunt's injury is a tough one for OSU, however, but a well-timed bye week should give the Pokes plenty of time to prepare for the Longhorns next week in Stillwater.

Baylor's first game had a lot of people raising their eyebrows during a 59-24 whipping of SMU but the next game looked a lot more like the Baylor of yesteryear after falling behind 20-10 to FCS foe Sam Houston State. Baylor responded well in the second half to put away SHS but it surely left Bears fans a little uneasy heading into a weekend meeting with 2012 giant killer Louisiana-Monroe on the road.

Texas Christian was given a gift when its first conference game as a Big 12 member came against the lowly Kansas Jayhawks but TCU did not make the most of the opportunity. Yes, TCU won, but it did so in an unimpressive and sloppy manner in its 20-6 victory. Really, there is no realistic way to gauge how good the Frogs are after struggling to beat KU and pounding FCS member Grambling State 56-0. Time will tell and maybe we'll know sooner than later as TCU plays host to Virginia (2-1) on Saturday.

After two weeks, ISU had arguably the most impressive resume in the league with victories against Tulsa and Iowa. A 37-3 victory against Western Illinois on Saturday was also a positive step but, while ISU has managed to win, it hasn't managed to do so in style or with much authority. The Cyclones still have a lot to prove and a win on Saturday against Texas Tech would be a good start. But so far, ISU should be riding pretty high.

Tech looks markedly better than it did last season up to this point in beating over-matched competition by scores of 44-6, 58-10 and 49-14. Tech's offense is still a force, ranking sixth nationally in passing and seventh in scoring. There is no question the Red Raiders are improved but how much has yet to be seen. If they can steal a road win in Ames, it will be a good sign before facing five ranked opponents in a row.

Things can't get much worse for the Jayhawks. After staring off the season with a 14-point win against FCS foe South Dakota State, Kansas lost a home game to lowly Rice (25-24) and blew multiple opportunities at home against TCU in a second-consecutive home loss. KU has a chance to get a second victory on the board for new coach Charlie Weis Saturday against Northern Illinois before the sledding gets really rough with No. 14 KSU, OSU, No. 6 OU and No. 12 Texas consecutively. KU's defense has looked better so far but the offenses in the Big 12 will test that theory soon.