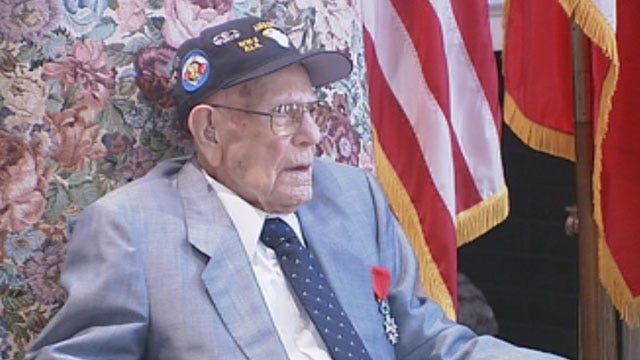 A Ponca City man who gained international notoriety almost 70 years ago for his 'filthy' exploits, received the nation of France's highest honor on Wednesday.

Jake McNiece was one of the true heroes of World War II -- he inspired his fellow soldiers, and Hollywood, as well.

Sgt. James "Jake" McNiece, at 93 years of age, still speaks with vigor and with pride about his service to the nation. In many ways, his story is like so many of the men of his generation who willingly jumped into combat, in an effort to defeat the Axis powers. And yet, there's also no doubt that McNiece's story is unique.

At the Capitol Wednesday, with his wife Martha at his side, McNiece was very much the center of attention, as he received several commendations. Among them, was the French Legion of Honor, presented to him for his role in liberating France from Nazi Germany.

"It was a thing that needed to be done, and we did it, and we're glad," McNiece told a group of about 100 people gathered in the Blue Room.

Sixty-eight years ago, McNiece and his men – paratroopers with the famous 101st Airborne Division – also grabbed some attention. In applying war paint to each other's faces before what was sure to be a deadly drop behind enemy lines in Normandy, the unit showed a defiant and determined Allied will, and photos of the occasion gave the men international recognition.

Subsequently, McNiece and his men, who didn't hide the fact that they bathed infrequently and would occasionally run afoul of military protocol, became known as "The Filthy Thirteen."

Hollywood twisted their story into the 1967 film "The Dirty Dozen," starring Lee Marvin and Ernest Borgnine.

The movie was fiction, but McNiece says what he experienced was very real, and still gives him nightmares today.

"I jumped into Normany on D-Day with 20 men," McNiece explained, "And at three hours, I was down to 17 killed or captured. Only three of us lived."

McNiece regrouped and fought on. His reformed unit also jumped into Bastogne, a key move that helped turn the tide for the Allies in the critical Battle of the Bulge.

The average lifespan for a paratrooper in the war was 1.5 jumps. McNiece made four jumps, and always had men ready to go with him.

Pushed to explain how he was able to lead men under such difficult and dangerous circumstances, McNiece said it was because he never sent a man on a mission that he couldn't accomplish with them.

"I never sent them anywhere that I wouldn't go," McNiece said, "And when you build that confidence in them, they will protect both sides of the rear."

McNiece says it was an honor and a pleasure to serve this nation that he loves so dearly, and receiving the French Legion of Honor ranks as, perhaps, his greatest honor.

The only thing that would trump it, he says, is if he could dedicate the honor to the men who didn't make it, and who lie in unmarked graves across the ocean.